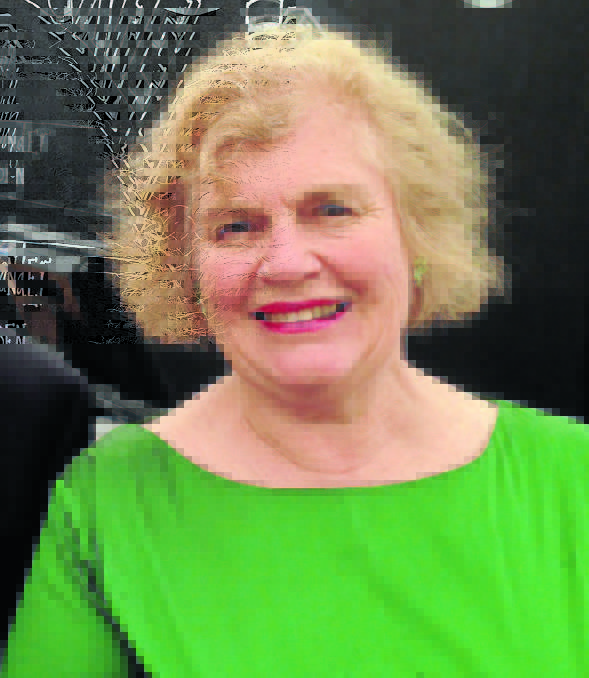 Helen Musa, nee Duff, was awarded an OAM for service to the visual and performing arts.

A childhood in the wings of the Forbes M and D Society sparked a love of theatre that has earned Helen Musa a place on the Queen’s Birthday Honours list.

Decades of theatre experience later, Helen (nee Duff), believes Australians are more creative than we are given credit for - and that creativity comes from the nation’s grassroots.

Her own passion for the arts was birthed here in Forbes and nurtured through the local schools and M and D Society.

Now based in Canberra, she has worked and travelled, teaching, directing and writing about theatre.

Helen, best known to her Forbes schoolmates as Mopsy, was the daughter of shire engineer Gordon Duff for whom the drive around Lake Forbes is named.

Her mum, Maysie, was very much part of the local arts scene and very involved in the M and D Society.

“Mum often read scripts for the M and D so I got to hear a lot of new scripts,” Helen said.

“When I was at Forbes High School I wrote and put on a lot of plays.”

Those early efforts - variable in their success - were still fresh in the minds of several old school friends who joined her to congratulate her on her OAM on Tuesday night.

“Someone reminded me of a particular play I wrote on Bermuda (long) socks, when Forbes High School decided we could wear them instead of short socks,” Helen said.

Helen studied at Forbes High School until she was 15, when she went to boarding school.

While in Newcastle, Helen “saw a fabulous job in Penang” (Malaysia) and moved there.

She spent four years as drama lecturer at the university as well as directing plays.

It was there Helen met and married actor and radio presenter Musa Masran.

They returned to Australia, where Musa did the director’s course at NIDA and Helen taught.

She was head of drama at a school in Mittagong when their son Omar was born.

The family moved to Queanbeyan, where Helen worked at a boys’ grammar school.

Helen worked as a theatre reviewer for the Canberra Times from 1982, then as its arts editor full time from 1996.

She is passionate about both the arts and reporting on it.

“People say arts journalism is ‘soft’ news but it’s not,” she said.

“It’s a very exciting job but it’s still journalism - you’re looking for a story: what’s going on, who’s collaborating or conniving with whom.”

After retiring from the Times in 2007 she became a consultant for the Asia Pacific Journalism Centre, taking journalists into Indonesia and Timor Leste and hosting Asia Pacific journalists visiting Australia.

“I speak Indonesian, so I was able to translate,” Helen said. “It was a very interesting time, a lot of fun.”

She is now arts editor for the Canberra CityNews, a role she took up in 2011. Helen also still coordinates the Canberra Critics Circle, which she formed in 1991, and the group presents the annual ACT Arts Awards.

While social media gives everyone a platform to share their views on the arts, Helen believes there is a need for the qualified and specialist critic.

“I’m a theatre critic, I wouldn’t presume to review Swan Lake or Beethoven’s Fifth,” she said.

The best thing about her job?

“All the weird and wonderful people I meet,” she answered immediately.

“I quite often say, after an interview, ‘well I didn’t know that’.”

Helen was delighted with the OAM honour and said it had been wonderful to receive congratulations from so many people.

“I’m also delighted because journalism has a reputation somewhere between used car salesmen and street walkers … few and far between are the journalists who get up on these occasions,” she said.

Helen’s son Omar, now 31, has inherited his parents’ love of literature and is now in Malaysia working on his second novel.

He has released two solo hip hop records (The Massive EP and World Goes to Pieces), two self-published books (The Clocks and Parang) and a self-titled album with hip hop group MoneyKat.

Helen’s father Gordon Duff was shire engineer in Forbes from 1944 to his premature death in 1964. It was his work on one very important project that earned him local fame.

“During a series of devastating floods that began with the Lachlan River flooding in 1950, Jemalong Shire grappled with the serious problem that the town was totally isolated during times of floods and was itself divided into three parts,” Helen said when she spoke in Forbes Heritage Week in 2008.

“As a small child perched on Camp Hill and missing out on school, I enjoyed all the fun of watching the helicopters flying by with human beings suspended from them while the army ducks took important people from one part of Forbes to another.”

For the grown-ups, however, it was no fun. Gordon saw a solution and persuaded Jemalong Shire Council to purchase the old Iron Cove Bridge in Sydney.

Each of the nine lengths was 38.5 metres long and required special permission to transport over the Bells Line of Road.

Five spans were re-erected at Turner’s Crossing, three at Gunning Gap and the other at Mafeking Creek, Wirrinya.

“The largest of these bridges at Turner’s Crossing was named the Gordon Duff Bridge and if you’re driving from Cowra or Grenfell, you’ll still see the signs pointing there,” Helen said.

“You’ll be wondering what such a huge bridge is doing in the middle of nowhere. Very simply, for many years and even in recent times, it provided the only access into the west.”

When the bridge eventually went up there were huge celebrations. But Duff’s health began to fail. He had suffered terribly with asthma after his war service.

“He pushed on and developed a huge roadmaking plant, as well as setting up several quarry sites of great worth,” Helen said.

“In the months before his death, he had applied for and got a grant to take off on an international fact-finding tour to engineering-minded countries like the Netherlands, Japan and Argentina.

“It never happened. He was only two minutes away from his doctor John Dent when he had a fatal attack in his office.”