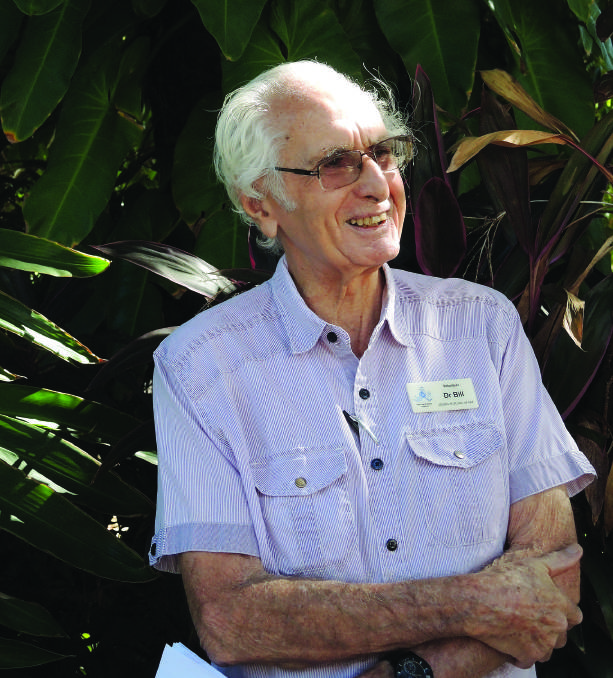 Dr William John Peasley was named in the Queen’s Birthday honours list for significant service to the community as an inland explorer, historian and author and as a general practitioner. He was born and raised in Bedgerabong.

Bogged to the axles in desert sand, his young family in the car, Bill Peasley might have reconsidered his childhood dream of working in Australia’s remote north.

Since he held Sky Pilot in Armhem Land in his hands at Bedgerabong Public School in the 1930s, the young doctor had “felt a great desire to venture” into remote places.

Finding Aboriginal artefacts including stone axeheads on the family farm on the Lachlan River addedto his curiosity.

“Previous to my discovery I had never seen an Aboriginal person and consequently had never thought about them, but I now began to wonder about them,” Dr Peasley wrote in his book, The Last Outposts.

“I decided that one day, I would travel to some remote area where the Aboriginal people still pursued a traditional way of life and, perhaps, I would have some idea of how the people had lived on our farm.”

By the time he became bogged on Ninety-Mile Beach, Dr Peasley, his wife Anne and three young sons had already travelled 6000km in their overloaded Mark IV Jaguar Saloon - a car he concedes was “entirely unsuited” to the job.

They had 500km to their destination: a job as Broome’s only doctor.

It had been a long road from Bedgerabong.

Dr Peasley was one of seven children born to Ernest and Edith at ‘Rose Vale’, near Bedgerabong.

In a book he has compiled for his family, he wrote about life in Bedgerabong in the 1930s and 1940s.

The publication details life from kerosene lamp lighting to the Coolgardie (meat) safe, the labor-intensive washing and ironing day, home-births and swimming in the Lachlan River.

He watched the last local bullock wagon travel the South Condobolin Road laden with wool bales, and went droving with the horse and sulky.

The Peasley family saw their first movie in October 1933 thanks to Amusu Touring Talkies from Manildra, who brought “the pictures” to Bedgerabong every six to eight weeks.

“As we neared the store we saw a large tent … with many lights shining and and people milling about,” Dr Peasley wrote.

“The films we saw that night, ‘Africa Speaks’ and ‘Rain or Shine’ were a tremendously exciting experience for us as we had never seen moving pictures and we could hardly believe our eyes. Although (more than) 70 years have elapsed since that night it made such an impression on me that I have never forgotten the excitement of the occasion.”

Bill attended the one-teacher school at Bedgerabong, then went to Forbes High School for just under a year, boarding at St John’s Hostel.

“I was terribly homesick and I seized any opportunity to go home for a visit,” he wrote.

“Once a month the church of England clergyman, Padre Ernest White, would go out to Bedgerabong to conduct a morning service there …

Bill refused to go back to high school for second year and attended Bedgerabong until he was legally old enough to leave at 14.

This caused some tension when he later wanted to study medicine.

Bill had joined the army when he turned 18, but World War II ended while he was in training camp.

He joined the British Commonwealth Occupation Force and was sent to Japan for 18 months.

“As we pulled into the wharf at Kure we could see the devastation caused by the American bombing raids … the whole of the shipbuilding area was almost destroyed and much of the city in the vicinity had suffered severe bomb damage,” he wrote.

Bill had the opportunity to visit Hiroshima and “could not believe that just one bomb could cause so much damage”.

He returned to Hiromisha several times while on service in Japan.

“It was amazing how quickly the survivors began to erect small houses from whatever materials they could find amongst the devastation,” he wrote.

“Although many of the survivors bore the scars of burns and other wounds … they did not show any resentment towards the occupation forces, at least not to the British Commonwealth component.”

On return to Australia, servicemen were asked whether they would like to do any training towards future jobs.

“I said that I wanted to study medicine,” Bill wrote. “... they informed me that such a course would not be possible because I did not even have the Intermediate Certificate, let alone the leaving certificate.”

Bill returned to the farm somewhat nervous, but within weeks received notice that his IQ test results had been reviewed and - if he could achieve his Leaving Certificate in one year - he could go on to study medicine.

This he achieved and he was studying medicine in Sydney when he met and married Anne, a nurse at Leeton Hospital.

By the time Bill completed his studies, they had three young boys to load in their new 1946 Mark IV Jaguar saloon for the drive across the Nullabor.

While the car was “a thing of great beauty” it was not suited to the journey they embarked on and they had their first break-down before they got out of the yard and another five minutes down the road.

The Jag did deliver them to Perth, where they began their WA adventures.

“After several months, I realised I would not like to do general practice in a city for the rest of my working life and my thoughts returned to my childhood dream of working in remote places and amongst Aboriginal people,” Bill wrote.

He soon secured a job in Broome with the Royal Flying Doctor service and again loaded the family into the Jaguar for a nine-day journey north.

It was on this journey that they got the Jag bogged in sand. They were rescued by stockmen and did reach their destination.

Dr Peasley was the only doctor in Broome, also looking after the surrounding Aboriginal communities and pastoral properties.

They were intense years, but at last he got an insight into Aboriginal life.

In need of a break after two-and-a-half years, the Peasleys moved back to Perth where their fourth son was born.

The lure of the north proved too strong and the family moved again to Port Hedland in 1959 and three years later to Carnarvon.

While they were demanding years, Dr Peasley did gain the insight into Aboriginal culture that he had longed for.

“I formed a close relationship with Paddy (Djargween) and, realising that I was interested in Aboriginal culture, he undertook to introduce me to some of the customs of his people,” he wrote in The Last Outposts.

When it became necessary to send their older sons to boarding school, Bill applied for another job - this time with the Commonwealth Immigration Department.

In 1968 they were on a boat to Italy and Bill started working with the migration department in Rome.

For three years he worked in Italian cities and the family travelled Europe.

Back in Australia in the early 1970s, Bill worked with Community Health.

It was during these years that he pursued his interest in the journeys of some of early Western Australian explorers.

“1974 was the centenary of the Forrest expedition which travelled from Geraldton to Adelaide and a proposal was made that a party be organised to follow in the footsteps of that expedition,” Bill wrote.

“When I heard of this I volunteered to accompany the party as the medical officer and my offer was accepted.”

In 1976 he lead a small party following the tracks of the 1986 Carnegie Expedition.

They went into the desert, with camels, and followed in the footsteps of the explorers as far as Alice Springs.

“Because time did not allow us to complete the expedition following Carnegie in 1976 we intended to finish this in 1977,” Bill wrote.

“But the old Aboriginal people in Wiluna prevailed on us to abandon this to search for an old Aboriginal couple who, it was thought, might still be alive in the desert.”

Warri and Yatungka had broken tribal law when they fell in love and they eloped into the Gibson Desert.

Warri’s childhood friend and initiation brother Mudjon had tracked them a long distance, under orders to bring them back.

The couple evaded him for years and lived - isolated - for decades.

Severe drought conditions gripped the country in the 1970s and Mudjon, wondering if his old friend was still alive, turned to Dr Peasley for help. Mudjon led the doctor and a team of 4WDs into the desert.

After weeks of searching they did find Warri and Yatungka, frail and surviving only on a bush fruit called quandong.

While their search was a matter of life and death, the forbidden romance captured public imagination.

Dr Peasley’s book, The Last of the Nomads, was published in French and German and made into a film in the 1990s.

The Order of Australia recognises his work as a member of the Royal Flying Doctor Service in the top end of Western Australia in the 1950s and 60s.

It also recognises his journeys to retrace the footsteps of explorers including David Carnegie, Lawrence Wells and John and Alexander Wall across the top end.