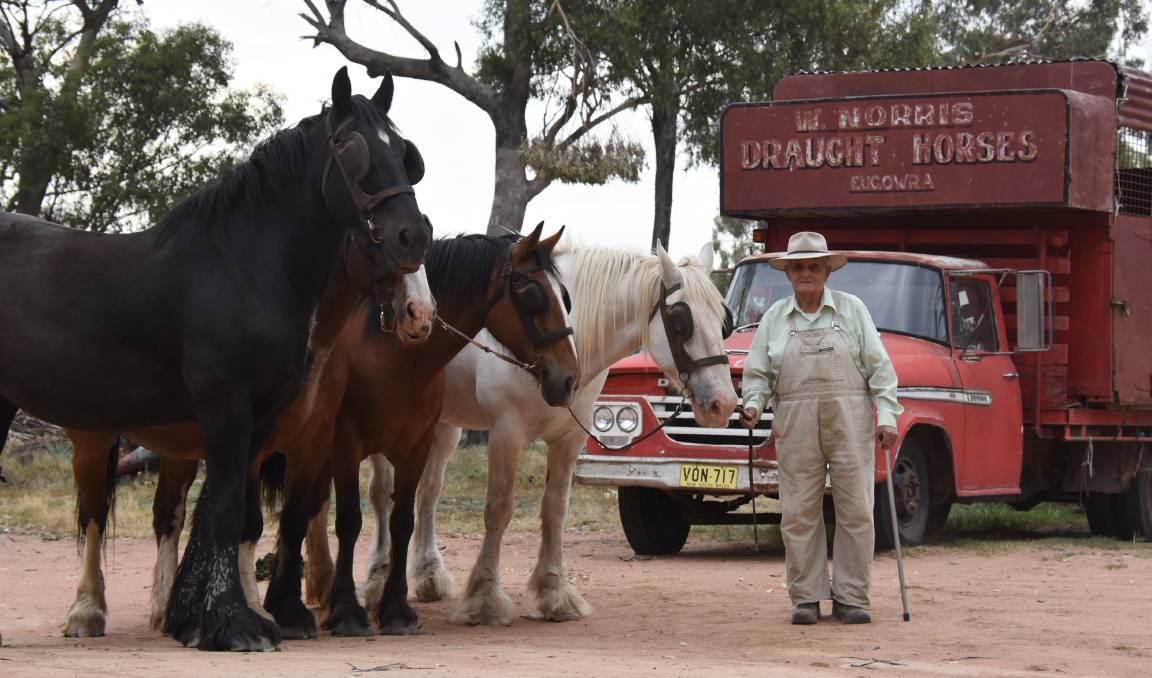 Wilf Norris was going to school at Trewilga when they were building the Newell Highway.

Each day he’d linger on his way to and from school to admire the mighty draught horses pulling the scoops and graders and carting gravel.

He’s devoted his life to ensuring the work of his beloved horses is not forgotten.

Today, he is named on the Order of Australia Medal list for service to heritage preservation.

The Eugowra man has done far more than ensure museums record the work of the draught horses, he has been a living exhibit.

Up until about six years ago Wilf, who turned 90 last year, and his family kept the horses working the family farm on the Escort Way – stopping many travellers.

They have shown hundreds, quite possibly thousands, of people how the mighty horses worked.

Wilf’s love for horses grew from the day he took control of a 10-horse team on his family farm near Peak Hill.

It was 1942 and the family’s farm worker, along with all other young men who were able, went to join the war effort.

Wilf was 14 years old and his schooling finished that summer.

He worked that team for eight years, growing wheat crops, before his dad bought a tractor and made plans to get rid of the horses.

Wilf couldn’t bear the thought of that and in the end, his father gave him the team, he bought his property at Eugowra and started out on his own.

It wasn’t until 1962 when a future for the beloved draught horses started to take shape.

“My thanks go to the Eugowra Escort Rock committee who asked me to put my horses and wagon in to the reenactment (of the gold robbery),” he said.

“I got a lot of comments, and it gave me the idea I had to get the horses out in public.”

The late Frank Pengilly urged Wilf to continue breeding the same Australian Draught Horse bloodline his father and grandfather had.

“He said, ‘you are going to have a great life with them’, and he was pretty right,” Wilf remembered this week.

The horses led him into filmmaking, including the 1972 British-Australian comedy Sunstruck with Harry Seccombe.

Wilf still laughs as he recalls getting the British actor with all his ports and cassette tapes onto old Dobbin, and then trying to encourage the placid horse to run away when the actor dismounted.

There were also plenty of laughs during the making of Dad and Dave.

Wilf taught Geoffrey Rush how to drive a two-horse team and single-furrow plough, and Bill Hunter how to cut hay.

He’s driven horse teams through the streets of Sydney and around Canberra’s Parliament House.

He was asked to recreate the iconic Black Soil Plains painting, and with a team of 11 horses drove a wool-laden wagon from Warren to Dubbo.

“I’d like to thank my two outriders, John Marshall and Don Carberry, who did a daring ride during the trip to bring the team under control when they got a fright,” Wilf said.

Wilf’s wife Pat is not to be forgotten in this story. They married in 1955, and will celebrate 63 years of marriage this July.

The couple had eight children, and it is clear from the photographs that adorn the walls of their home that the love of horses and horsemanship has been shared across the generations.

The children have also been an enormous support – and recorded their own achievements.

Wilf taught them all to work the horses and heritage machinery, Laurie and Bill later provided demonstrations at the farm stay for tourists brought out by Sally Bray.

They operated the Lachlan Vintage Village for 11 years, sowing and harvesting wheat and hay the old-fashioned way and showing visitors how the horses worked.

“That was a great life,” Wilf remembered. “We met different people every day from all over Australia – and the world.”

Thousands of school children and visitors of all ages came to the Vintage Village and learned how the horses worked.

“The horses did a great job for the opening up of Australia,” Wilf said.

“We grew all our wheat with them, they built the roads and railways.”

The Norrises returned to their farm in 1984 but the horsework didn’t end.

Wilf sowed and stripped 300 acres of wheat and marvelled at the way his 10-horse team walked nine to 10 hours a day for weeks on end, although they always took Sundays off.

“All they asked for was a good feed at night,” he said. “And they produced their own spare parts!”

Until a handful of years ago, the draught horses could be seen cutting hay – the family stacking it the old fashioned way – on the farm along the Escort Way.

Wilf was involved in the establishment of the Australian Draught Horse Stud Book Society and helped start the draught horse pulling competitions that displayed the power of the animals.

He started the Golden Plough, where the ploughman was judged on the straightness and neatness of his furrow; his horsemanship and ploughmanship.

Wilf won the competition two years in a row and was headed for his third when a sheep charged into him in the yards and broke his leg.

By the time he got back behind the plough, a veterans competition had been established for the over 60s and he claimed the honours in that for 10 years straight.

The Eugowra horseman also took out two sections in the Australian Plough championships in Victoria, the Colonial Ploughing competition in Millthorpe and many pulling competitions.

His numerous trophies are in the Eugowra Museum.

The museum is also home to the historically significant Braveheart Wagon, and Wilf thanked Viv McMillan for the opportunity to put a team of horses in to drive it.

He added his thanks to Walkers AGnVET for their sponsorship of his participation in Forbes’ Australia Day parades. Wilf and his team featured in the parades for 30 years.

On reflection, Wilf reckons he’s had a good life. It’s been a gift to get to spend every day with his beloved horses.

“Boko was my favourite horse,” he said. “He was bred from my father’s and grandfather’s line and won quite a bit of prize money for me.”

When Boko developed stomach cancer aged 15, Wilf took him all the way to Sydney University to see whether anything could be done.

He admits he shed tears when the big horse passed away.

Another horse that stands out in his mind as “marvellous” was Darkie, who lived to 37.

Sadly, the gear the Norris family had used for more than seven decades of horse work was stolen in 2016.

Nothing has ever been recovered.