There's a new senator in town. She's charismatic and contradictory, and has been helicoptered in from outback Queensland in what many consider to be a political stunt. Well, that's what those in ABC's upcoming six-part drama series Total Control are thinking, at least.

And they're not wrong. When Deborah Mailman's Alex Irving is invited by Prime Minister Rachel Anderson (Rachel Griffiths) to take up a seat in the Senate it's hard not to see it as anything other than a power play.

Alex has just been hailed a hero after standing up to a gunman on a domestic violence rampage, and the prime minister sees it as a publicity goldmine for her party.

But, being the strong woman that she is, Alex is not ready to sit back and repeat the party line.

"Right from the go get [Alex] is seen as someone who shouldn't be there," Mailman says.

"She's looked at with - not with contempt - but she certainly understands that she's seen as a publicity stunt and that she understands the cynicism around her being in a position such as senator.

"She gets all of that, she can understand that but really, she's there to do a job that she signed up for. The thing about Alex is that she doesn't back away from what she commits to and she's going to make this work, hell or high water.

"People aren't really expecting much from her and I love the fact that she's there to prove them all wrong."

The moment Alex decides to take control of her own political agenda is refreshing. 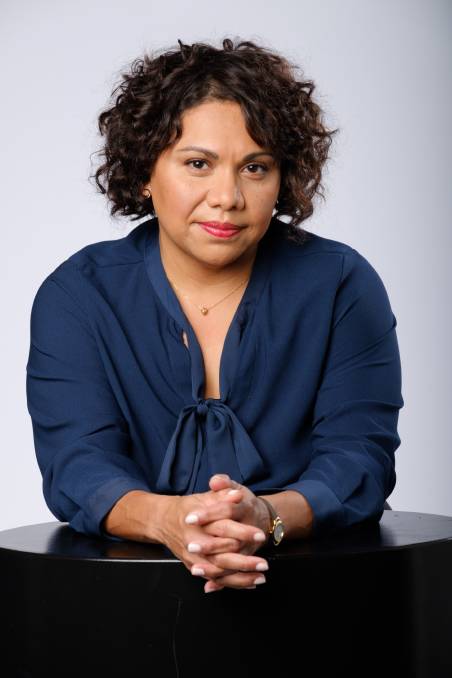 It comes just after Alex has a panic attack and midway through a live television interview she kicks off her shoes - "these heels are killing me" - and she says: "I'm barefoot in your studio because I'm sick and tired of pretending that everything is OK ... If I can be here as I am, if I can stand up in the senate then anyone can. Publicity stunt or not, that's why I'm here."

It's a moment of unfiltered honesty, which some might say is the most unrealistic thing about Total Control.

"Let's look at our own politics here. As an audience and a general public, we want to have some sort of honesty and realness when we hear our politicians talk," Mailman says.

"Often you hear the PR wording around any issue really, and often I just want to say 'Can you just speak straight? Speak clearly, speak the truth, speak honestly'. Often I would rather hear that.

"There is so much consideration around how they might be perceived and I think what is great and why Alex is - in this fictional world - why she is attractive to so many people is because she goes against everything that people feel like they know or expect from our political leaders. I think honesty is what gets her through."

Mailman has no intentions of running for politics herself, so after seeing her take on the role of senator one can only dream of her bringing this type of realness to politics.

Perhaps it was the fact the actor didn't shadow politicians in the lead up to the role - even though she had the opportunity - which gave her the edge?

For any of the political nitty-gritty, Mailman had Griffiths - "a political beast" and the woman once tipped to play Julia Gillard in a rejected telemovie. For the most part though, Mailman wanted to hone in on the fact that politics is so unknown to Alex.

"Alex is out of this world," Mailman says.

"She's not from it and I wanted to remain a little bit distant from other people's experience because I wanted to make her experience Alex's own and not try to emulate or be inspired by how other people, other politicians, have found parliament.

"I made a decision to not talk to other people and allow Alex to find this world on her own and for me to inform the work without that information." It's the fact Alex is such a fish out of water - while still being an intelligent, passionate and highly capable person - that makes her such a compelling character.

The role was written with Mailman in mind, and yet the actor still sees this moment in her career as having "all the planets aligned".

The project has brought her to once again work with director Rachel Perkins - "a director that I love working with" - and Blackfella films.

The role of Alex is also the first time Mailman has played a lead role in a drama series - something that is hard to believe given the quality and frequency of the actor's work over her 20-year career. In a recent interview, Griffiths described Mailman as "the most awarded Australian actor who has never been given a lead role, which I think was a national crime that needed to be addressed". And, obviously, that has.

But Mailman says she has never viewed the success of her career by that definition.

"Most of my work, if not all, is ensemble but I guess the main difference with this is that I was feeling more pressure in this role than I ever had because I am playing the leading female protagonist," Mailman says.

Alex - and even Griffith's portrayal of the prime minister - are the sorts of complex female roles both actors strive for, not just because they want to hone their craft as artists, but because at the end of the day, women should be portrayed on screen with the same complexities as men.

Of course, this is not a new conversation in the entertainment industry, but one could argue that the fact it's still a conversation indicates action needs to be taken towards creating more opportunities for these types of roles. 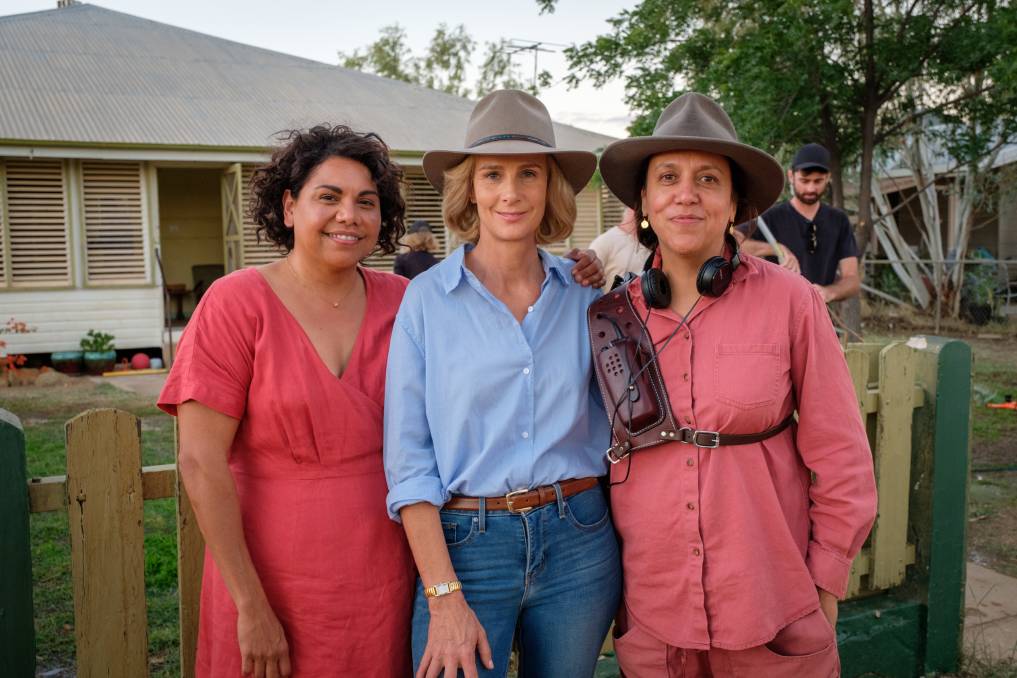 "I think with Rachel Griffiths also being our executive producer on the show, she's very adamant on having complex female roles," Mailman says.

"It's questioning what does it look like when you have complexity in a female character that is in the position of prime minister and also as Alex who is helicoptered into the position of senator?

"It's looking how they navigate - on so many levels - that sort of world that isn't that kind to them, that isn't supportive of them. And how they both, in their own way, walk through all of that and still remain true to who they are as women and as people, but also being successful in that position."

It's an interesting match having such complex female roles when discussing politics. The reality for women in politics is that somewhat trivial things - such as the clothes they choose to wear - are up for debate, unlike their male counterparts.

These barriers women face while representing their constituents in politics is a common theme through Total Control - and in fact, creates the basis of Alex's relationship with the prime minister. But of course, it's not the only inequality and issue raised within the drama's plot.

Not surprisingly, the challenges facing Indigenous people is also a recurring theme - including land rights and racism and Total Control's working title particularly pointed out the later.

When the six-part series premiered at the Toronto International Film Festival in September, it did so under the controversial title Black Bitch. A week later it was announced that it would be renamed as Total Control.

"While the ABC supported the working title's deliberate calling out of the racial slur by a strong and proud Indigenous woman, the term can also be taken, and used, in a negative way," an ABC spokesperson says.

"The ABC wants to ensure this excellent show is viewed and talked about by as broad an audience as possible for the great story it tells.

"To ensure the focus is on the story and not the name, the ABC chose to broadcast the series with the title Total Control, which aptly describes the central character's fight for power over her life and politics."

The phrase itself appears quite a few times in the show, particularly when the senator is in her hometown of Winton, Queensland. At one point Alex's car is even vandalised with the words.

For Mailman, however, filming in regional Queensland - south-east of where she herself grew up - was about showing the audience a world they may not be familiar with. 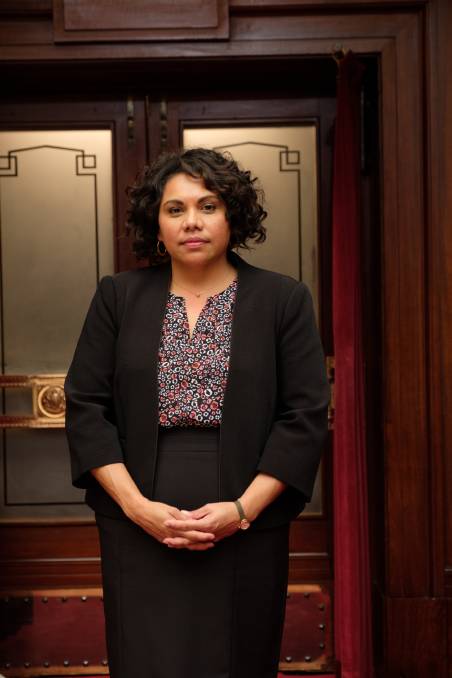 "Winton is a beautiful place, outback Queensland is gorgeous, but also, the issues that do affect the communities that are out there, it is tough going, particularly when you look at our farmers and they are at the mercy of droughts and floods and how that can destroy a livelihood," she says.

"When we were up there, a few of the local girls there who have come from a generation of farmers were saying the last flood in winter basically killed the 100,000 head of cattle, which is their livelihood.

"The suicide rate of farmers goes up when there's those sort of events happen so it is something that if you're not there, and if you're not in those communities, you're really not aware of how hard it can be."

The show's writing is of the moment - tackling issues that are not only seen in politics but also communities. But at the heart of what Mailman tries to do when telling this story and portraying these issues is get it right.

"There's something different about Alex as a role, and I saw it as a challenge for myself so first and foremost that's what attracted me to this.

"But I guess the other part to that is with Blackfella Films there is such integrity with what they do and the stories that they want to tell, and I always want to be part of telling those stories."

This story Deborah Mailman taking in the view from the hill first appeared on The Canberra Times.