Major Triples: It was Paul Baker, Mitch Andrews (sub for Brian Asimus) and Scott Andrews who were successful against Bill Adams (sub for Shane Sharman), Daniel Tisdell and Brian Tisdell.

While it was unfortunate that both teams had to enlist substitutes to get the final completed this did not detract from the event.

The lead fluctuated until Scott's team drew clear 21 to 15 after picking up 5 shots on the 14th end. Brian's team couldn't match it with their opposition over the remaining ends and went down 34 to 20.

Congratulations to the 2019 Major Triples Champions, particularly Scooter who has won the Club Singles, Pairs and Triples this year and only missed out in the Club Fours.

Viv Russell moved into the semi-final after he scored a 9 shot victory over "Uncle" Bob Grant. Scott McKellar will be Viv's opponent in the semi after he disposed of both Grant Lambert and Tara-Lea Shaw.

Scott had to give Grant a two shot advantage but he quickly overcame that, recording 7 shots in the first three ends. From then on he pretty much had control of the game except for the 10th end where Grant picked up a maximum (4 shots) followed by a 2 and another 2 in the next ends. Scott got back on track and went on to record a 9 shot win.

In the game against Tara-Lea, Scott was at a 6 shot disadvantage but again he picked up the deficit and kept the momentum throughout to get home with a comfortable win.

The semi finals to be played by this Sunday are between Lindy Cannon and Peter Mackay and Viv Russell against Scott McKellar. The winners of this game will play off for the title on Sunday December 22.

Presentation day: Don't forget that the combined presentation is Sunday December 15 from 12:30. If attending, please place your name on the sheet on the notice board.

Greens maintenance: As most will have noticed the greens are undergoing necessary renovation. Number 2 green is nearly ready for competition play while Number 1 green will now be out for several weeks. Number 3 green will also be renovated in the coming weeks. Many thanks to all the volunteers who help keep our greens in top order.

Wednesday: It's not hard to see Christmas Day is just around the corner after the mid-week lady and men bowlers gathered last Wednesday week for their well supported luncheon and presentation of 'classic' awards to men along with a smoked Christmas ham raffle.

The festivities continue on Sunday when the club will hold a monster ham raffle, sales from 1-3pm.

More Christmas festivities at the 'Bowlie' with the monster hamper raffle tickets now on sale, drawn Sunday December 15. You won't have to look hard to find a ticket seller, and when you do, they are $2 each or three for $5.

Back to last Wednesday week where card draw winners were Geoff Coles and Jan Waugh with a 22-15 win over Loris Stewart and Geoff Williams. It was close at 'half time' with the winners only in front 10-8.

Fifty two took to the greens with other results showing a couple of close matches while a few others were a bit one sided.

Angela Dent and Rob Priest had to win the last two ends (four up) accounting for Anne Mackay and Trevor Curry 15-14 over 16 ends.

In another close game Anne Nixon and Peter White also dominated the final ends to account for Irene Riley and Wayne Burton 14-12.

Also finishing strong (except for the last where they dropped five) were Sandra Priest and John Baass with a 19-15 win over Deanna Williams and Lyell Strudwick.

Barry Wright and Paul Dent had a close encounter over 18 ends with Phil Moran and Ron Thurlow before winning 15-12.

Denny Byrnes and Jim Moloy were comfortable in their 19-12 win over Fred Vogelsang and Sid Morris as were Bill Looney and John Gorton winning 21-14 over Peter Greenhalgh and Don Craft.

A 'hot' combination of Sue White and Alf Davies were never troubled winning 19-10 over Pam Stevens and Laurie Crouch. Not so Nola Girot and Tony Bratton with a 21-17 win over Glennis Ryan and Peter Mackay,. It was 10-all at 'oranges'.

Gail Mackay and Barry White scored eight on the first five ends to see the final 13 ends equal before recording a 17-9 win over Alice Allen and Barry Shine.

Kaye Toohey and Ralph Waugh enjoyed their time on the green with a 20-10 win over Robyn Mattiske and Ray Dunstan as did Noel Jolliffe and Cliff Nielson with a 19-10 win over John Ashcroft and Shannon Birmingham.

During a superbly presented luncheon bowlers were treated to their annual awards, most on the 'comic' side than serious. 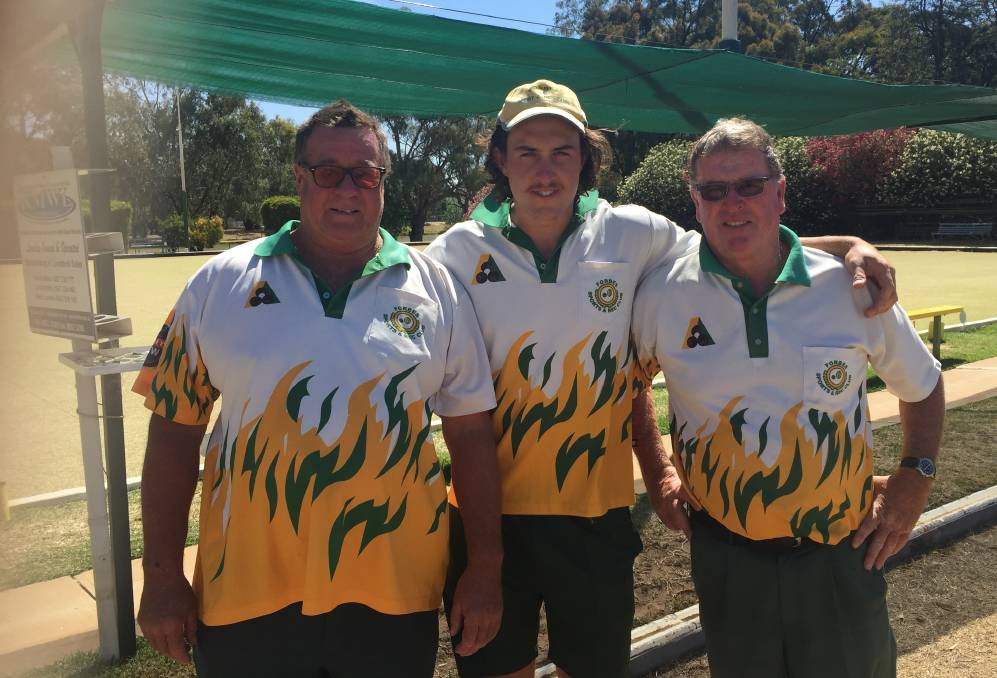 On Monday, December 2, Wayne, Ian and Sandy had a good win with 16 points. Wendy, Heather, Kim and Liz finished with 9.

Ian's team didn't score a point until the sixth end and thought they were going to get thrashed. Somehow they made enough points from six ends to make 13 points, when we played 14 ends all up. Kim and Liz were the winners with 15 points.