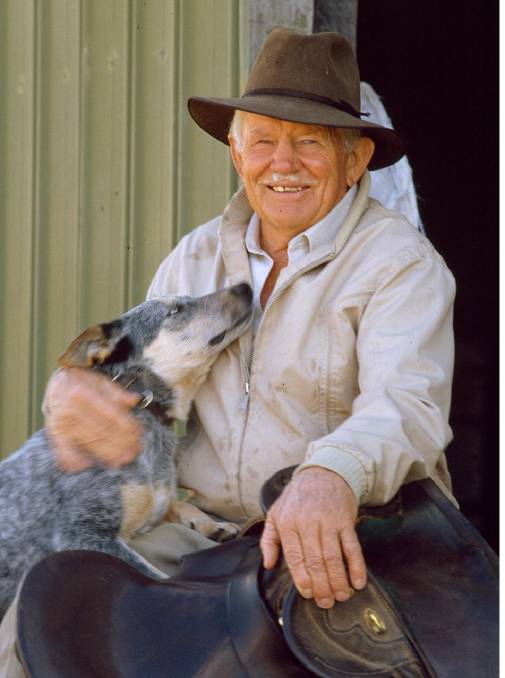 Back in Australian hands, the company founded by the late RM Williams, has plans to be an all Australian manufacturer as well. Picture: National Archives of Australia.

The new owners of iconic Australian bootmaker RM Williams are promising to expand the company.

Andrew and Nicola Forrest visited the company's South Australian factory for the first time this week since they bought it last year.

The Forrests told company staff they planned to expand the factory and even bring overseas manufacturing back home.

The leather good firms is believe to manufacture about a third of its items overseas.

When he bought the company last year, mining billionaire Forrest said it had rankled with him the bootmaker, founded in 1932 by RM Williams, was owned by overseas interests.

"I'm just so glad it is now back and I'd have to say the family has a big solid lump in its throat about returning RM Williams back to Australia," he said at the time.

Andrew and Nicola Forrest told about 400 staff they are looking at expanding its factory in Adelaide's northern suburbs and ensuring all products are Australian made.

Andrew and Nicola Forrest visited the company's South Australian factory for the first time this week since they bought it last year. Picture: RM Williams.

It had passed through several hands before it was sold to overseas company LVMH Group, which owns French luxury brands such as Louis Vuitton, in 2013.

LVMH Group was absorbed by private equity firm L Catterton several years later who in turn put it up for sale in mid-2019.

Mrs Forrest told media the staff had told they needed more space at the factory.

The coronavirus induced foray to pursue more online sales after the doors to their many stores had closed had met with initial success.

Mr Forrest wants to ensure all RM Williams products are made in Australia.

Some are currently made in Portugal, Bangladesh and Hong Kong.

The company brought manufacturing of leather bags back to the Salisbury plant in October from Italy.

"I want to drive for Australian made only, and that's our vision and we're going to do that as soon as we possibly can," he said.

"Andrew and I want to continue the legacy of this great company, and that means continuing to employ and support the Australians that have built and grown the brand," Mrs Forrest said.

"By bringing RM Williams back into Australian hands, we will ensure the Australian craftmanship continues to be loved and worn all around the world."

Mr Forrest said it would take time to find the skilled staff necessary to do the job and had suggested they might have to wait until education providers could catch up.

Mr Forrest said the business also needed to be beefed up to allow the process of returning manufacturing to Australia to happen as quickly as possible.

"Whatever it takes we'll do," Mr Forrest said.

The company recorded a record month in December, thanks to the increased interest in online sales.

The company has 64 outlets across Australia and seven overseas stores.

Mr Vuppalapati said coming under Australian ownership again had delivered extra momentum too in the past few weeks.

"Australian-owned has added to the narrative,'' he said.

Film star and entertainer Hugh Jackman sold his five per cent stake in RM Williams to Tattarang under the deal, but will remain a brand ambassador.

1993 - Bennett and Fisher go into receivership.

2003 - Former News Corp chief executive Ken Cowley buys out Kerry Stokes for what is believed to have been $12.5 million.

2013 - The company was sold offshore to LVMH Group, which owns French luxury brands such as Louis Vuitton, in 2013. The sale price is believed to have been $110 million. LVMH Group was rolled into a private equity firm L Catterton several years later.

Meanwhile, the The Nationals have released a plan for regional Australia to lead the country's post-COVID economic recovery through efforts to modernise and rejuvenate Australian manufacturing.

The Nationals say they believe there is an abundance of resources and opportunities for regional communities to be the value-add pacesetters by focusing on the entire supply chain and not just the original raw product.

"We need to have strategic capability in our own country and regional Australia has a significant role in doing that," Senator Bridget McKenzie said.

"Jobs equals economic security. We need to make Australia make again. We need Aussies to be able to buy Australian Made.

"Implementing The Nationals policies will deliver 800,000 new manufacturing jobs by 2035. This is proudly ambitious and is achievable."

Senator McKenzie said the global COVID-19 pandemic had highlighted the need to protect supply chains in essential products, such as medical supplies and food and beverages.

Manufacturing 2035 is the culmination of extensive roundtable and video teleconferences with manufacturers from across regional Australia.

"It was a delight to meet and hear from so many regional manufacturers and be able to incorporate their vision into what will be Australia's most ambitious manufacturing program since World War 2," Senator McKenzie said.

"A renewed focus on the revival of Australian manufacturing, along with the designation of a number of strategic areas and the allocation of dedicated funding, warrants regionally based Offices of Regional Manufacturing to support the regions in achieving this ambitious goal."

The Nationals 9-point plan to double employment in Australian manufacturing:

"Manufacturing has played a crucial role in the development of many regional towns, including and a renewed focus on manufacturing will help deliver stronger economic growth in regional Australia," Senator McKenzie aid.

"Private investment also has a key role to play and one way to encourage the private sector is for the Australian Government to provide tax incentives for manufacturing-based investment."