The weather forecast did not bode well for the Forbes golfers who had enjoyed some sunny conditions over previous weeks. Saturday had wet ground conditions and rainy aerial conditions, with occasional bursts of strong winds. This combined to create tough conditions, which enabled the course to repel any really good scores.

The Saturday Mens comp was the September Monthly Medal, sponsored by McFeeters Motor Museum, with a much reduced field of 42 players determined to push aside the wet and rainy conditions and earn a 'Medal' for their efforts.

The A-Grade was indicative of the scores across the field, with a count back needed to separate the Winner from the Runner-up. Neil McMillan did extremely well to score a 72 nett, with an especially tidy back-9. This gave him the edge over Charlie Dwyer, who had a good front-9 but an unfortunate '7' on the 15th cost him.

The B-Grade had a similar scoring outcome but an easier determination of the result. Tony Cogswell looked almost relaxed throughout his game as he played to his handicap, finishing with a nett 72. Runner-up was Jack Dobell, who is on the same handicap as Tony but had a larger differential between his two nines, finishing with a nett 73. His nemesis was the 17th hole where an '8' was a blemish that came from nowhere.

The C-Grade had a clear victor but a tussle for the next best. Riley Pike was out early and enjoyed conditions better than most. His 71 nett was a model of consistency, with only an untimely '7' on the 4th hole being his blemish.

The Runner-up spot was decided on count back, with Matt Duff getting the nod ahead of Robert Scott. Matt took the front-9 to settle in to the swing of things among the inclement weather, but then focused throughout the back-9. Robert had a delightful front-9 but then crashed on the back-9 with a 'Bo Derek' on the 15th.

The NTP's went to: 9th - Ben Robinson; 18th - John Betland, both of whom managed to snare their 2's. Over the field there were only four 2's scored, which was not surprising considering the weather. Peter Cowhan scored the other '2' on the 18th while Dave Rhodes bagged one on the 3rd.

The Super Pin on the 3rd hole resulted from a shot deserving of a champion. Ben Robinson played his shot well, holding the ball into the wind to finish only 1.76 metres from the hole. Unfortunately his putt left a lot to be desired and a par was the end result.

Conditions were certainly wet and windy all day, with one benefit being the rain making the sand on the greens smoother than expected. It was a day for hardy souls only, with ten ladies battling it out also. Some of the men managed nine holes while others made it to the 15th before they fled to the Pro Shop, resulting in nine unreturned cards of which the majority were in the back half of the draw.

While the weather ensured there were no real 'scorcher' scores, surprisingly there were only a few 'blowouts'.

In the A-Grade field John Zannes has been struggling for form lately, but managed to stay in two figures for his scratch score. The B-grade had two players who 'raised the bat' but still the majority were above the high 70's for their nett scores. The C-Grade did the best of all with only one outlier score and the rest below the middle 70's for their netts.

Birdies were hard to find, with a few on the par-5's and a smattering on other holes throughout. Peter Dawson did well to grab three birdies, but then suffered on some of the par-5's.

Anthony Alley managed to score an eagle on the 6th hole, having flirted with the trees all the way. And Jacob Bernardi did well to par all of the par-3 holes, being the only player to do so. Meanwhile the Betland boys did well on the back-9, with Steve shooting 37 and John 36. Steve had consistent pars with a bogey on the last, while John was 'up and down' with two birdies and two bogeys.

The 'Bad Lucky Prize' goes to Dave Bernardi who managed a couple of 10's, a '9' and quite a few 8's. His worst nightmare was the 9th hole where he was most disappointed to miss out on single figures, scoring a '10'. The creek rose a bit with the balls he dunked in there.

The Sunday Stabelford Medley was contested by players who were determined to either improve on Saturday's effort or who wanted to have a swing. Only two players did not manage to make it all the way.

The winner was Peter Dawson who managed 33 points, and who slipped back from Saturday's effort. Runner-up was Trevor Toole with 30 points and some vigorous swinging exercise. The NTP on the 9th went to Trevor Toole, and the 18th NTP was unclaimed. There was no ball sweep.

We record with sadness that Tom Edols passed away on Thursday of last week. Tom had been a stalwart of the club for many years, serving as President for a time and assisting where he could when he was able.

His love of the game extended to encouraging many youngsters to participate, to assisting with work on the course wherever needed, and to participating in as many competitions as he could.

He still cycled around the town until his hips caused him problems last year, and enjoyed a hit with the Tuesday golfers until recent months. Some of the Golf Club's history passes with him. Our condolences go to his family.

The 2021 Wallace Cup has been run and won. Last Sunday Ben Robinson met George Falvey in the Final, when both had to contend with some unpleasant weather.

Ben carried his Saturday form over to the match, and relished receiving a few shots from George. Ben was ultimately too strong and consistent on the day, while George's rhythm was buffeted by the wind, resulting in a 6&5 win to Ben.

Thank you to Warwick Judge for keeping the ball rolling and reminding players to get their matches played in good time. For those who missed out this year, be prepared for the call for entries in March and April next year, and then get amongst it all.

The commencement of the annual 'Summer Sixes' competition is fast approaching, with the competition commencing from 11th October. Handicapping rounds for non-members can be played before that.

This summer, the First Prize is a golf trip to the Hunter Valley for the team, accompanied by Head Pro Adam, with golf fees and accommodation paid. So get chatting among your mates and register your team before Friday Oct 8. More details as we approach the season commencement.

The Covid Health Regulations are still in place, requiring changes to the golf programme, and cancellation of some events. At this stage we have the following:

A few hardly souls ventured out onto the course last Saturday under the threat of heavy rain. Fortunately, most had finished their round before the real heavy rain started. The event was changed to an Individual Par due to their not being sufficient players to play the 4BBB.

Winner of the event was Veronica Rebellato with a 1up score. Well done Veronica. Ball sweep went to Jenny Fletcher 1 down. NTPs to Jenny Ridley 9th and Lindy Cowhan 18th.

What a fantastic day for golf on Wednesday.

There were some very good individual scores. It was a draw for partners after play and unfortunately for some of those with a great score they drew someone who didn't have quite as good a score.

The event was sponsored by A Kingston, G Ridley and A Reade. Many thanks to them.

The winners with a great score of 75 points were Ethel Coombs and Kate Steele-Park.

Runners-up were Enid Baker and Ann-Maree Gaffney with 69 on a countback.

NTP 's went to Ethel Coombs on the 9th and R Lyell on the 18th, both were quite close to the hole with Ethel getting her birdie.

Well done to all the winners.

This Saturday is an Individual Stableford sponsored by Albie Callaghan. There will be two ladies' divisions, it is not a Medley.

The shootout which was to be held on Sunday has been postponed until we are safely able to play it.

Next Wednesday is an Individual Par event sponsored by Sally Perry in two Divisions.

Don't forget there is a medley ever Sunday for anyone looking for something to do now the weather is warming up. 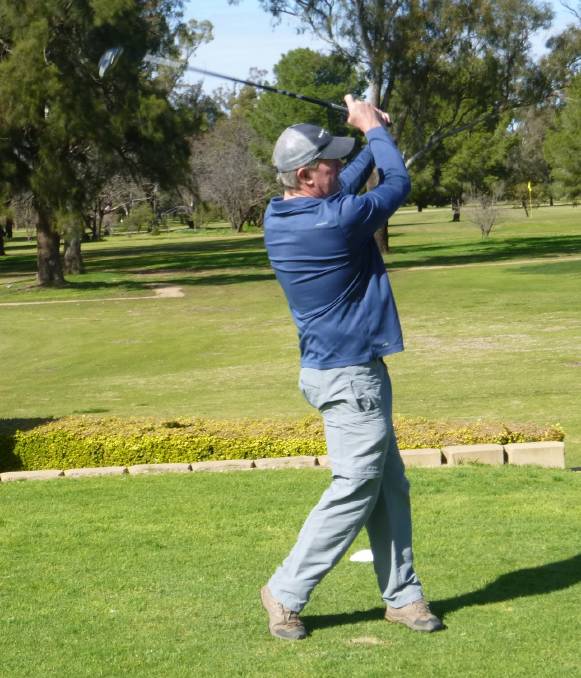