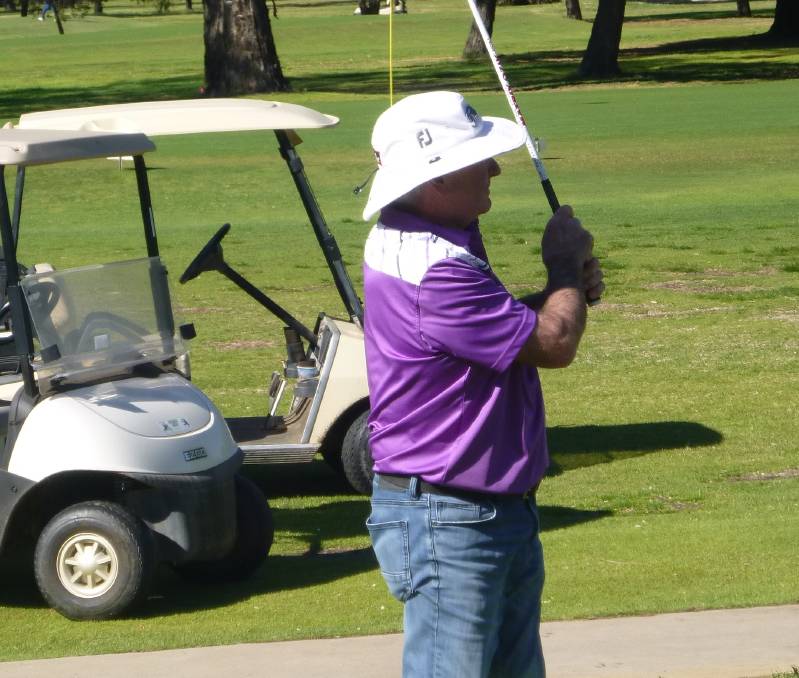 With sunny skies beckoning, the Forbes golfers bounced onto the course looking to bounce into contention for a win on the day. But for some the bounce of the day did not always go as planned, and there certainly was not much bounce on the greens to help.

The Saturday Men's comp was an Individual Stableford Medley, which replaced the scheduled 4BBB Ambrose Medley, sponsored by Albie Callaghan. A good field of 94 players got off to an early start and kept flowing until well past lunch time. The early starters pushed their balls through the heavy dew, while the latter golfers contended with dusty conditions on the greens.

Div-1 winning scores were close with a number of players within cooee of a win. Ultimately it was the scintillating finishing form of Ben Robinson who won the day, using his handicap well to cover some earlier indiscretions. His 38 points included enough on the first 9-holes to stay ahead of the pack.

Runner-up, on count back from three other players, was Kim Herbert. His 37 points was memorable for the unblemished record on his last 9-holes, which included eight pars and three 3-pointers. Unlucky to miss out were Shane Sallaway, Phil Wells and Jonathon Morell.

The Div-2 players had an even tighter finish, with a count back needed to decide a winner. Three players, Peter Tisdell, Isaac Vale and Fonz Melisi, finished on 39 points. From there a hole-by-hole count back resulted in Peter Tisdell being the winner and Isaac Vale being the Runner-up.

All three players scored above their handicap on each nine holes, with each having a minor smattering of blemishes. In the end it was the 9th hole that tipped the balance in Peter's favour.

The NTP's went to: 9th - Terry Griffiths; 18th - Todd Callaghan, both of whom managed to snare their 2's. Over the field there were nine 2's scored, of which only one was by a Div-2 player. Todd scored the only '2' on the 18th, despite many hitting the green, while the 3rd got a hammering.

The Super Pin on the 3rd hole resulted from a shot that was one of the closest in recent weeks. Ian Bown played a classic-shaped shot that finished only 1.1 metres from the hole. He crept inside the early leader, Jon Morell, by only 10 centimetres.

Conditions were beautifully sunny all day, with the occasional whisper of a 'breeze'. The real challenge for the day was on the greens. These were quite furry, which surprisingly did little to hide the sand from the renovations. It meant that a firm stroke was needed on the putts, even the shortest putt, but at least the borrow was very much less than usual.

Some of those short putts missed surprised the golfer. Matt Duff was too casual with a tap-in putt on one hole, with the ball barely mading it halfway to the hole. And Scott Kirkman missed an easy short putt on the 18th green, about which he was quite vocal.

Some players surprised themselves with the length of their shots. The Penalty Area on the 13th came into play for more golfers than usual. A following breeze and warmer conditions meant that tee shots which usually finished short of that hazard somehow managed to run into it.

Dave Bernardi was also surprised on one of his shots. He needed a forceful approach shot out of the long grass on the right of the 4th fairway to reach the green. He connected sweetly and watched as his shot veered left of the green, scuttled up the pathway and finished on the 5th tee, just missing the player ready to make his tee shot.

As beautiful as the day was for golf, it affected the golf players quite differently. Peter Tisdell was one of the early starters, and the day turned out beautifully for him. But not so for his playing partner Rob Webb, who finished first, but at the wrong end of his Division.

It was good to see some long-lost faces back. Peter Grayson was out there enjoying his game, as well as Tim West and Ash Hogan. It was also pleasing to see Brett Woonton taking a break from his Chemist activities and having a swing. They all enjoyed their walk if not their score.

The Sunday Stabelford Medley was contested by a good field, all of whom wanted to get the best out of the good weather. And many of them did well.

The Winner was Louise Scott with 39 points, and who picked up just reward for her many weeks of good play without success. Louise did it the hard way, needing a count back over Runner-up Jake Shaw (39 pts). It was a good back-9 that got Louise over the line.

Thank you to those players who donated to the "Do-It- For-Jarrod". The funds from this day will help support the development of cancer treatment for children.

The Foundation provided prizes, which we have used in a random draw of those who donated. The recipients are: 1st prize - W Judge ('Leuk the Duck' cap), 2nd prize - Adam Demidjuk (sun visor), 3rd prize - Alf Davies (ball sleeve). These can be collected from the Pro Shop.

The Parkes Men's Open, scheduled for this weekend, has been cancelled due to the ongoing Covid Restrictions.

The Annual 'Summer Sixes' competition is getting closer, with the competition commencing from 11th October. Handicapping rounds for non-members can be played before that. Some team entries have already been received, but get chatting among yourselves and get your entry in as soon as possible.

The Prize Pool includes a First Prize of a golf trip to the Hunter Valley for the team, with Weekly prizes for Best Nett - Member, Best Nett - Non-member and Best Scratch, as well as ball prizes. Register your team before Friday Oct 8. More details from the Pro Shop.

A reminder to all players to fill in the dots on their score card. This will help the manual entry process when some writing is illegible.

We are getting towards the end, hopefully, of Covid Health Regulations but they are still in place, requiring changes to the golf program. At this stage we have the following:

Last Saturday the event was an Individual Stableford as we could not play the event set down due to COVID.

There was a good field and some very good scores. Thanks to our event sponsor Abie Callaghan.

Winner of Division 1 was Robin Lyell with a well compiled 41 points from runner-up Ev Uphill with a good score of 37 points.

Winner of Division 2 was Veronica Rebellato also with a great 41 points from runner-up Kate Steele-Park with an excellent 39 points.

NTP's went to Ann-Maree Gaffney on the 9th and Sally Perry on the 18th.

Wednesday's Event was an Individual Par sponsored by Sally Perry in two Divisions. Again, a very good field took to the course in beautiful golfing weather. Thanks to our sponsor.

Sally Perry has been playing some very good golf of late and continued on Wednesday winning her own trophy in Division 1. The best scores were in Division 2 with the best score being plus 5 from Lindy Cowhan. Well done girls.

Division 1 winner Sally Perry with square on a countback from Verna Lane.

Division 2 winner was Lindy Cowhan plus 5 from Kate Steele-Park plus 3. Kate is playing great golf at the moment but can't quite crack the win.

NTP's went to Kathy Collits on the 9th and Jean Judge on the 18th.