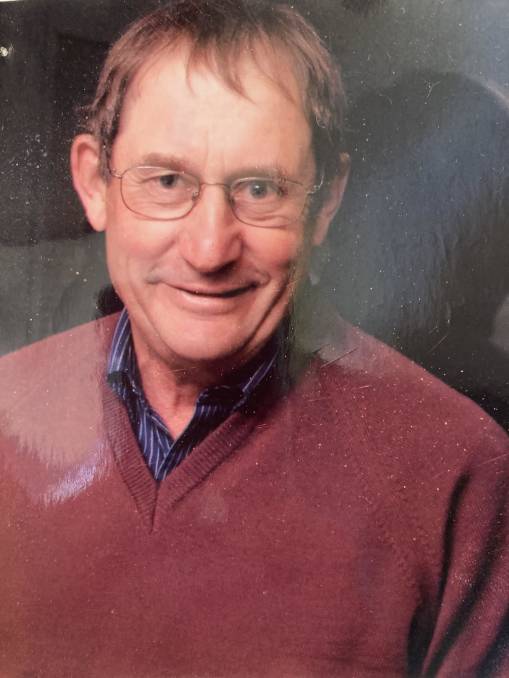 John Kenneth Greenhalgh of Eugowra sadly passed away earlier this month on September 9.

His private graveside funeral service was held at the Eugowra Cemetery on Tuesday, September 14 with Reverend Joy Harris performing the service.

John's brother Colin spoke first on memories of their early days at 'Carmina' before brother George then added his memories followed by friend Ron Hay.

Emma Greenhalgh added brother Allen's memories before she then read the family eulogy.

John was then laid to rest next to his wife Lorraine.

John was born on September 6 1947, to Ken and Leila Greenhalgh in Eugowra.

He was the eldest of four brothers: Colin, Allen and George. Surrounded by the large number of aunts, uncles and cousins, there was always extended family around them.

Here are some thoughts from those close to him that were shared at his funeral.

John was not only a special brother, but he was also a mate. We shared a bedroom at Carmina from a very young age and progressed through our childhood doing many things together, like trapping rabbits and horse riding.

John bought his first car when he was 17 and he became the go-to man for Doug and myself. The car was a Holden E.H. and was his pride and joy.

Weekends were either the night trots at Parkes or Cowra and checking out the girls in Canowindra and Forbes.

John loved his trips to Sydney, mostly for football and seafood. Invariably he would eat up to five times a normal serve at a seafood smorgasbord.

Those trips collected stories and inevitably, a lot of people of Eugowra were part of them.

On one such trip, John somehow ended up on the stage with Barry Beath and the rest of St George team.

John, Mr Greenhalgh, Bandy, or to us: Da and Dad.

He had so much involvement in this community, and was an all-round genuinely friendly man - if he turned up somewhere, and he didn't know anyone there, he would strike up a conversation, and make a new friend.

In 1968, Dad and Mum met on a blind date, set up by a friend of Dad's, though Dad insisted he be able to see her before he agreed to go on the date!

She was working in the hairdressers at the time, and he arranged for a walk-by to check her out.

He decided that, in his words, that she was a good enough sort", and he agreed to the date.

After a period of courting they became engaged, but Mum's father has said that she was not allowed to marry before she turned 21.

In an attempt to both follow this request, and show they meant business, they married on November 22 1969, Mum's 21st Birthday.

Dad was a keen fisherman and camper. There are many memories of him taking us camping on the Lachlan river always looking for the big catch.

He would be a big organiser of the event, and the cook of the campfire.

I remember the thrill of the day when he pulled in one of his biggest catches, off a drop line, on a branch sticking out of the water.

It was a massive Murray Cod, which took two hands to hold, and the bragging rights for the biggest catch that trip was something he proudly held onto.

Dad was a mad footballer, initially as a player in his younger years.

Just after they moved into their new Pye Street house with a new mortgage, and after just one night in the new house, Dad went to training with the Eugowra Golden Eagles, and breaks his leg.

This resulted in a couple of months off work - not great timing when he had just taken on a new mortgage!

Dad loved his Golden Eagles, and his South Sydney Rabbitohs, and a second TV was always set up in the office for Dad to watch the Rabbitohs and leave the rest of the house in peace, where he would often be telling the players what they did wrong.

He was a man of the land, and a shearer. He was awarded the silver shears for 25 years shearing in the McIntyre shed, and I remember spending hours down at the sheds, climbing in the wool press to stamp down the wool ready to be made into bales.

The trips to trotting meets across NSW were a regular weekend activity in our household and I have fond memories of the annual trip where Eugowra residents would load on the school bus and head for the Peak Hill races.

It would be filled with fun, laughter, drinking and dancing. As president of the Eugowra Harness Racing Club for 13 years, followed up by a stint as the president of the Western Districts, trots were a huge part of Dad's identity.

The Canola Cup was his driving ambition, to set up and deliver the best trotting carnival in the Central West.

The fact that the Canola Cup, COVID notwithstanding, is still going strong is a testament to his legacy.

Dad is known to a lot of people around Eugowra as Mr Greenhalgh.

This is from years of driving the school bus and transporting kids across large portions of the surrounds of Eugowra to the many schools in the area.

He was always protective and wouldn't stand for any disrespect on his bus run.

He was also known for his singing and dancing. He would sing up a storm at a karaoke and be one of the first onto the dance floor.

It would be a long night if there wasn't a song to sing, or someone to get up and dance with!

When I was in primary school, Mum instructed a group of us girls in a choir for St Matthews Church.

Our singing session was finished, and we were listening to music on the stereo in the lounge room, which was turned up to the max, as it always was.

We were all waiting for the parents of the other girls to come collect them.

Dad arrived home from a long day at work and could hear the music playing, but he was not aware of the room full of girls sitting in the lounge room.

He waltzed into the room, singing at the top of his lungs, completely unaware, and in his underwear.

I don't think any of us had seen him move so fast in his life to get out as quick as he could.

I also don't think I had ever seen Mum laugh that hard in her life!

To me of course he was always just Dad. Perhaps a slightly clumsy but loving parent, I knew he always had the best intentions, and I always knew he loved me and Sarah.

The loves of Dad's life were Mum, us girls and his grandkids.

I particularly love to remember the 'stick em up' game he played every night at dinner with a 15-month-old Lexie that made her giggle in hysterics.

Tamara really made him proud. His joy at attending her High School graduation was such an important milestone he loved to share.

When he saw the grandkids, his whole face would light up.

Dad was known to love his food. Whether it was eating out, or something he cooked, food was a great way to connect with others.

In particular he loved his fish and would tell me every phone call about what piece of fish he'd got from the fish man that week.

If cooked right, he would tell anyone who would listen, "that was the best piece of fish I ever had".

His love of feeding people has clearly rubbed off, as Sarah became a chef, and I won't let anyone in my kitchen.

The year he told me how good my Christmas lunch was, was one of the best compliments I've received, even if it was followed by his statement that "he didn't think it would be."

Sadly despite great friends, his ambition to continue to do the things that he loved slowed when Mum passed away in 2012.

And while family traditions such as trips to the Eugowra show and Christmas together continued, he stopped doing many of the things he had loved.

As hard as many tried, life became a struggle for Bandy, and his health continued to decline.

Our family, and Eugowra as a whole, lost a great man last week, just after his 74th birthday.

We are disappointed to not be able to share this funeral with all the people who love him and look forwards to a time when we can do his memory justice and invite everyone to join us when we can to remember and celebrate his life.

We are all deeply saddened and will be at a loss without him, but we take comfort in knowing that he is with his Lorraine once again.

We love you, and we'll miss you Dad.