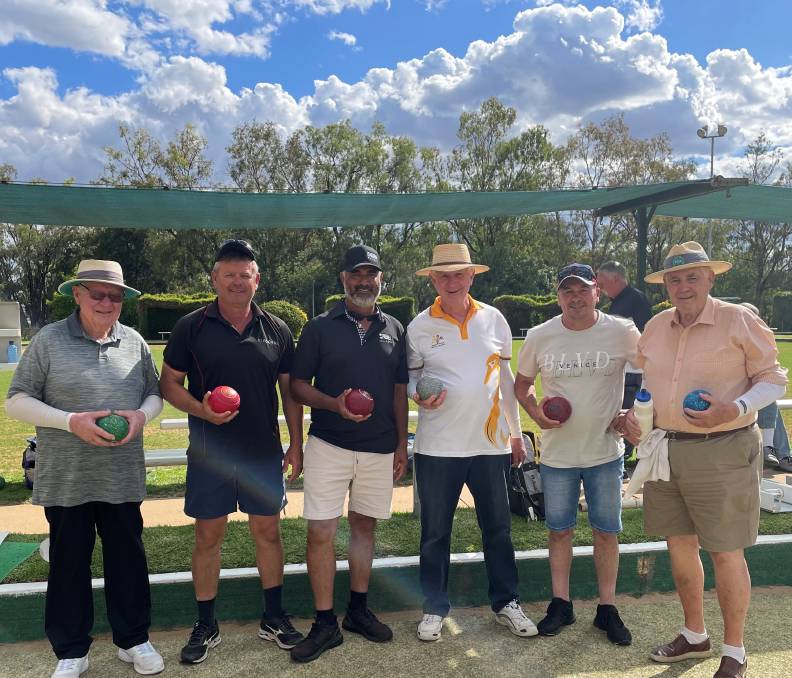 There is more than bowls at the Sports and Recreation Club with a monster 20 ham raffle to be held on Sunday with ticket sales from 1pm prior to the first draw at 3pm.

As club president Peter Mackay keeps telling us, "you have to be in it to win it, and the hams are the best available and ideal for that Christmas dinner".

While on the social scene at the 'Bowlie', entertainment after the ham draws Sarah Karaitiana will be on stage from 3pm. A great way to finish the weekend, win a ham and relax with some musical hits.

How's this for a comment from the sideline in bowls - "What a game witnessed by a crowd cheering on in a Minor Triples semi final which went down to an extra end at 19-all for Robert 'Pooch' Dukes' team to win by 4 shots, 23-19. The crowd stood and applauded the efforts of these six men."

Well said by the club's most recent state representative in Leisa Burton.

Players commented on included David Williams as lead with second Rob Priest in the winning Dukes team while on the other side of the scoreline were Ray Dunstan as lead, second Shayne Staines for skip Shane 'Booza' Bolam.

In the 'dressing room' after there was plenty of comment with most praising Dave as a difference playing above expectations for a relatively new bowler.

After nominations names were drawn for the hat for each team which helps in players getting to know one another better.

As 'Pooch' commented he would never have picked Dave or Rob but was so glad the way it was drawn.

And Shayne Staines played for the losers after being pulled in from mowing lawns as a substitute late commenting he felt so much better after playing a tough game of bowls than he did after when playing footie.

The Bolam combination were best out of the blocks to lead 14-6 after 12 ends, then 19-8 after 16 prior to one of the best comebacks seen for some time with the Dukes combo scoring 11-0 in the last five scheduled ends for 19-all. Four on the last and extra end had the Dukes trio smiling broadly.

The Dukes team now await the winner of the Lawrence Spackman, Bob Grant and Sid Morris team who have to wait slightly longer with a quarter final match to be completed prior to their semi final.

'Booza' Bolam did have some success over the past week teaming with 'Bert' Bayley in A and B Pairs winning 19-14 over the well supported combination of Sid Morris and Lindsay Willding over 20 ends.

The same cannot be said for the game between John Cutler and Jeff Nicholson who scraped home 19-18 over Denny Byrnes and Glenn Kearney over the scheduled 21 ends.

It was close all the way with the Kearney pairing lead 8-6 after nine then the Nicholson combo jumped in front 17-13 after 16 before scores were locked at 18-all prior to the last end.

Cliff Nelson did something most men bowlers would be proud of, winning against Leisa Burton and off scratch. In the handicap match of the Bentick Trophy Cliff received nine start but the score sheet finished 21-8 to the gentleman of bowls. He was never in doubt leading 11-3 after 10.

This week after Wednesday bowls weekly players from comps involving the ladies and men held their annual Christmas party which proved as successful as any yet held.

Amongst highlights involving selected awards to volunteers and a couple 'stirrer' efforts one of the clubs most respected gentlemen in Cliff Nelson was highlighted as the ever young ex-farmer, shearer and sportsman verges on celebrating his 90th birthday.

Due to publicity deadlines more on the life told of Cliff and other awards in next week's column.

Meanwhile, on the greens Ray Dunstan may have hoped he kept some of his form from last week to the triples game on Sunday where he led for Lyall Strudwick in winning the Wednesday morning social outing with a 23-18 win over the well credential pairing of Fred Vogelsang and 'birthday boy' Cliff Nelson.

In conditions a lot warmed they they have been in past weeks the game was in the balance until the last few ends with the winners only in front 10-8 at the half way mark of 20 ends then behind 15-16 with four to play before a 8-2 score in their favour on the run home.

Trevor Currey, like most other Wednesday players, mixes his game but last week brought his best to lead for Alf Davies in winning 34-15 over Peter Mackay and Tony Bratton in another 20 end game.

It was all but over after 10 with Trevor and Alf in front 18-2. Interesting to read where Peter and Tony almost score half their points in the last two ends with a scoreline 7-3 in their favour.

It took 22 ends for Lawrence Spackman and John Kennedy to win 25-18 against David Williams and Paul Doust. They held their best to last after being behind 10-11 at 'oranges'. Worth noting they got to 10 with a six on end 11.

He played very well, we're talking about Barry White who did not let skip John Gorton down winning 25-12 over two out of form golfers, Ted Morgan and Barry Shine.

Keen to win Mr White wanted to finish on end 19 of the 20 played. That was until both skips intervened.

The clubs leading skip John Baass was at it again last week steering Kerry Dunstan to victory over Bill O'Connell and Sid Morris with a score of 25-15. Bill and Sid were worried after seven ends down 9-0 but did show true form with a six on end 12, one of only five times they scored in 20 ends..

Another game of two halves, 8-2 after seven prior to 11-9 before a five on the last had the Byrne screw happy with their morning on the green.

Ted Morgan may have got touched up on the green but he left happy as did Paul Doust as winners of the in-house meat raffle to Flint St Butchery.