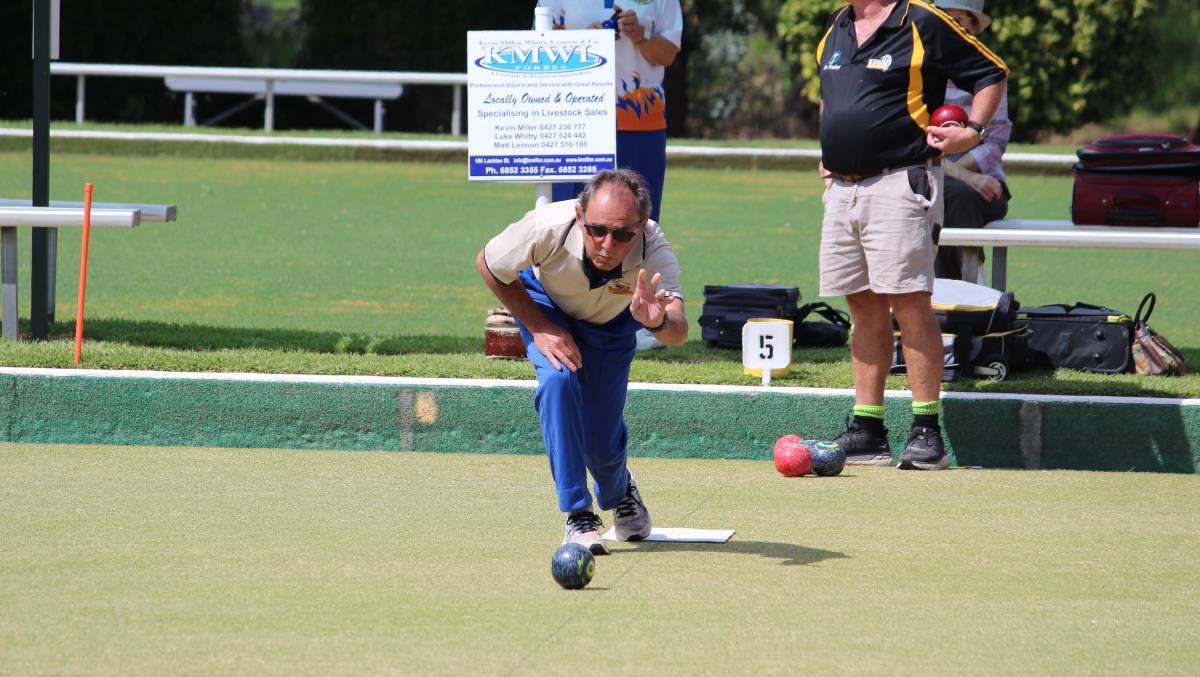 A AND B PAIRS

The final for the A and B Pairs championship has been decided after Paul Baker and Christian West booked their place to play 'Booza' Bolam and 'Bert' Bayley accounting for John Cutler and Jeff Nicholson last Saturday.

It only took three ends for the Baker/West combination to show they meant business leading 6-1 courtesy a five on end three.

Earlier the Bolam/Bayley combination scored a very impressive 19-14 win over the fancied Sid Morris, Lindsay Willding combination to book their place in the final.

As with other major titles nearing completion this final is sure to be one well worth witnessing.

The same can be said for the final of the Minor Triples where the come-back kids in David Williams, Rob Priest and 'Pooch' Dukes are waiting the semi final winner of the match between Laurie Spackman, Bob Grant and Sid Morris who face off against Trevor Currey, Kerry Dunstan Paul Baker.

There were two games played in the Bentick Trophy with Lindsay Willding winning over Christian West. However, no score was submitted for publication.

Played on handicap it proved interesting for Spro' Asimus to down 'Pooch' Dukes 28-21 over 25 ends played.

Draw for the semi final of the trophy has 'Spro' Asimus play Lindsay Willding which will be a game 'off the bat' as both are handicapped on 16.

Russell Hodge (handicap 10) is also in the semi finals waiting the winner of the game between Kerry Roach (6) and 'Bert Bayley (15).

Christmas for Wednesday bowlers proved highly successful last week with the annual presentation of awards amongst the highlights along with the prawns and scrumptious salad lunch and sweets so successfully catered for by the lady bowlers.

However perhaps the highlight was the presentation and talk on the life of the extremely popular Cliff Nelson who will turn 90 on December 28.

More on the life and success of the former farmer, shearer, tennis, golf and bowls master in coming issues of the Advocate, watch this space.

Bowls was also played with card draw winners Geoff Coles and Ray Drabsch with the closest of wins, 17-16 over Ted Morgan and Sid Morris.

First runners-up were Sandra Priest, Laurie Spackman and Peter Mackay on the toss of a coin with the score 10-all after playing Anne Mackay, Kerry Dunstan and Rob Priest.

With 46 players on the green, other game winners were Merv Langfield, Barry Shine and Lyall Strudwick winning 13-10 over John Baass, Kerry Roach and John Kennedy.

The final two games were a little one-sided with Barry White and Lyn Simmonds winning 25-16 over Noel Jolliffe and Tony Bratton while Geoff West and Don Craft cruised home 21-8 over Jim Irwin and Denny Byrnes.

On Wednesday December 8 we had a mixed day and bowled with the men and after had a beautiful lunch .

Thank you to everyone that contributed with the lunch and helped on the day - a good day had by all.

This was also the ladies last social day for 2021.

Mell will contact everyone to advise the date for when we will be returning in 2022.

This is the last report for the year and president Mell would like to take this opportunity to wish you all a safe and happy Christmas and a happy new year.

She looks forward to seeing everyone on the green for a better 2022.

20 bowlers came down for a game of Thursday afternoon social bowls.

Cheree Vincent and Lyal Strudwick teamed up against Kerry Roach and Viv Russell. Kerry and Viv got off to a great start leading 13-4 on the 11th however Cheree and Lyal made an outstanding comeback to win the game 21-16.

John Cutler and Scott McKellar played Fred Vogelsang and Lindsay Willding. John and Scott stamping their position early as front runners leading 15-3 on the 11th and held in there to maintain the lead to win the game 23-19.

Warren Keep and Al Phillips took on Dennis Byrnes and Peter Hocking. A very close game on the 11th with the score board showing 10 al until Warren and Al just snuck ahead in the lead to take home the win 25-16.

Ivan Hodges and Bill Adams came up against Paul Doust and Ron Thurlow. Ian and Bill flew out of the starting boxes and kept their opponents to only scoring 6 points in the first 11 ends. Ivan and Bill showed no signs of slowing down and took home the trophy 21-1.

Max Vincent and Tony Bratton played Bobby Grant and Darryl Griffiths. Max and Tony had a battle on their hands when they were down 5-18 on the 11th end and gave it everything they had. Bobby and Darryl proved to good and came away with the win 23-16.

22 keen bowlers enjoyed a great Sunday morning on the green with perfect weather. We welcomed a new bowler Scott Northey which is always great to see new bowlers come down and have a game. Welcome Scott and we hope to see you again.

We also wanted to wish one our regular bowlers and patrons of the club, Clive Herbert a very happy 80th birthday for Monday and in true form, Clive took to the green like it was a regular weekend for him.

Warren Keep and Al Smith came against Dennis Byrnes and Russell Hodge. Dennis and Russell were off to a great start and lead 9-3 by half time. Warren and Al started their come back in the second half and managed to just slip ahead on the 11th end 11-10. Dennis and Russell certainly weren't done yet and picked up 7 points in the last 5 ends to win the game 17-14.

Jim Irwin and John Kennedy came up against Michael Coles sand Viv Russell. Jim and John got off to a slow start with the score board showing 5-0 on the 3rd. Jim and John were able to win the next 4 ends in a row to go into the 8th end 5 all. Michael and Viv came out of the break on fire and won the next 6 ends out of 8 to storm home with the victory of 18-6.

Our triples game was played by Scott Northey, Clive Herbert and Tara Shaw verse Bec Roach, Peter Greenhalgh and Kerry Roach. It was a close game for a while until Scott, Clive and Tara picked up and extra point to go into the half time break leading by 1. Scott, Clive and Tara picked up another 7 points to put them in the lead 12-11 however Bec, Peter and Kerry were very lucky to pick up a 3 on the last end to win the game 14-12.

Lindy Cannon and Ron Thurlow played Alan Affleck and Geoff Coles. A nice and friendly game with only 1 point the difference on the 8th end. Lindy and Ron refueled during the break and came out to win 5 of the last 8 ends and stole the show to win the game 18-12.

Barry Anderson and John Cutler drew Ryan Schatz and Al Phillips. Ryan and Al were the first points scorers and the last. Ryan and Al held the lead to go into the break 6-4. Barry and John definitely pulled out all the stops and won the next 5 ends in a row to close the gap on the score board and only trailed by 1. John and Barry were able to pick up another point to jump into the lead 10-9 however Ryan and Al picked up the last end and won 2 points to put them in the lead and take the game 11-10.

Competition and social bowls are played at the Forbes Sports and Recreation Club.

Experienced players are more than willing to lend a hand to get newcomers started.