Last weekend saw the onset of real summer conditions, helping to dry out the ground and encourage work on suntans. Undaunted by the forecast sizzling heat the Forbes golfers were determined to finish their golfing year in style, and utilised all manner of tricks to nullify the heat and enable good scoring.

The Saturday Men's comp was an 18-hole Stableford with the prizes being Christmas hams, sponsored by Woolworths Forbes and played in two Divisions. The tantalising temptation led to 55 golfers doing their best to tuck a ham under their arm and present it to their family. The scores were pretty close for most of the field but the winners were clearly in front.

The Div-1 was won by Mitch Bayley with 41 points. He was well pleased with his effort, having been in a non-descriptive form of late. Despite starting with a triple-bogey Mitch did well on the front-9 but excelled on the back-9, starting that with a birdie.

The Div-1 Runner up was Alf Davies on 38 points. He had another consistent day scoring 19 points on each half, but had a roller-coaster ride on the back-9 with 1's, 2's and 3-pointers.

The competing Div-2 players were cast asunder by the best score of the day. Jake Lebrocque had one of those days where everything went well, and where he really capitalised on his healthy handicap. There were no 'wipe' holes in his score but he was able to open the shoulders on the back-9 and come home with 25 points, snaring four 4-pointers through his whole round.

The Div-2 Runner up was Matt Coles, who played his characteristic 'wandering minstrel' style of game. His scores wandered around also, and were highlighted by a marvellous 'eagle' on the 2nd hole which earned him 5-points.

The NTP's went to - J Betland on both the 9th and 18th. He converted for a '2 on the 9th hole but unfortunately could not finish in glory on the 18th. There were only six 2's scored, and all by Div-1 players.

The 3rd Hole Super Pin went to Jeff Haley who managed to use his body language to steer his ball to within 2.05 metres of the hole. But unfortunately it was just outside his preferred range to enable him to score a '2'.

The conditions on the course helped the ball roll and even bounce quite a bit. The dry ground helped the ball to skip along, and also provided a bit of extra bounce which sometimes helped and sometimes did not. Later in the day the wind became 'troublesome', making the 14th and 17th holes quite a challenge. At times it was so strong that it pushed the walking golfers backwards down the fairway.

It was sometimes difficult to pick the direction of the wind, and especially at the fickle 9th hole. One group were adamant that the wind was into them for their tee shot and each chose a suitable club. Their shots resulted in all of them 'airmailing' the green, resulting in bemused looks on their faces. We can only say to Paul, Terry and Scotty 'try again'.

The perennial problem of identifying your own ball has some players concerned. Frank Hanns has taken great pains to mark his ball prolifically. And yet, to the amusement of his regular partners, he quite often plays the wrong ball. He did this twice during his game. If he had been more perceptive he would have not lost so many shots and may even have earned a new ball to mark.

Les Little wants to improve his game so he can earn a few balls. In Saturday's game he had lost so many balls that by the turn he was looking to pick up the Bradman award. Maybe Santa will be kind to him.

Another player who wanted a ball was Ian Bown. He was irked that John Betland had snared the NTP on both holes. Ian himself was 'just outside' John's ball on the 9th and also scored a '2', and contended that John should share his NTP's. But once earned they are rarely relinquished.

The Sunday Stableford Medley had no takers, primarily due to the indifferent and changeable weather, and possibly as a result of domestic duties being so close to Xmas.

The 2021-22 'Summer Sixes' competition has completed the first half, and will resume in the week beginning 3rd January in order to make up for lost days during the flood impact. The plan is to finish the comp on schedule on 6 March, with the Finals to finish on 3rd April.

Get plenty of practice over the break and keep your eye on the Hunter Valley Golf Trip prize. Use whatever time you can during the break to play some games ahead if you are likely to be going away. It is also a good way of utilising the daylight saving hours.

The Mens and Ladies Golf Program for 2022-23 is in preparation. Some events are being moved around so when you get your program book study it carefully so you know when to take that vacation and when not to.

The 2021 Trophy and Award Presentation has been disrupted quite significantly over recent months. It will be scheduled for early in 2022, giving some players the opportunity to hold aloft the same trophy twice in the one year. So keep an eye on the notice board for the announcement of the Date.

Through the Christmas and New Year break there are a number of Stableford Medley's scheduled. The course is closed on Christmas Day, but Stableford Comps will be conducted on the following three days.

The first comp day for the Men will be the Monthly Medal on 8 January, sponsored by Steele Tech, while the Ladies will resume their competition play on Wed March 2nd.

Here is trusting that you have been good and Santa will bring you something really good. 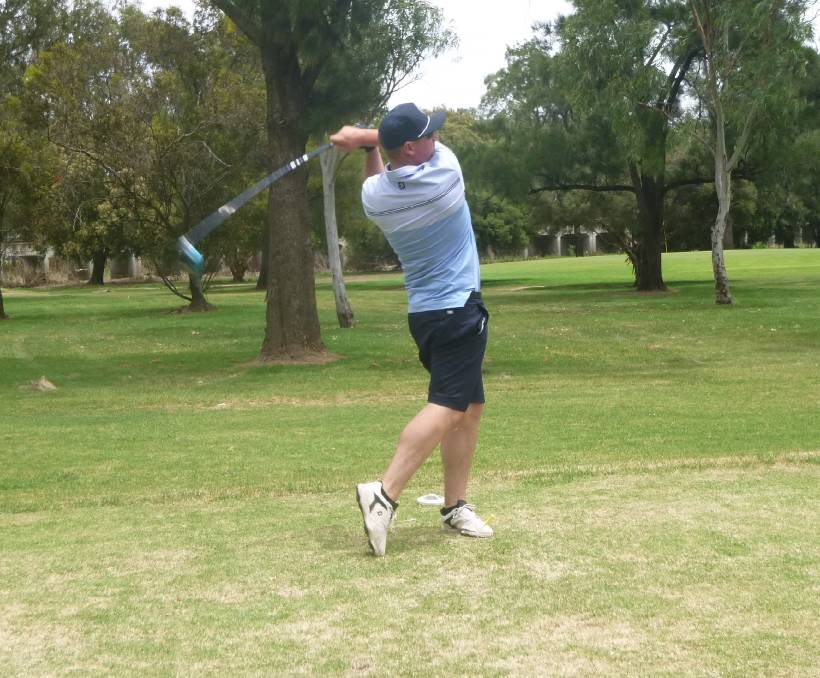 Jake LeBrocque in full swing as he climbs towards his winning score.

After a difficult few weeks the Summer Sixes comp, sponsored by Flannery's, Bernardis, BWR and Golf Harvest, was back into play. The sudden onset of summer had dried the course considerably from the previous week, and culminated in some fantastic individual scores.

The Week 7 scores were quite variable for the team results, which seemed to mask the fantastic individual scoring, but also reflected a number of absences from the teams. And then some individual scores were such that they were reluctant to put their name on the score card.

There were five teams with sub-100 rounds, of whom four were in Pool B. It was a titanic struggle between 'Just for Fun' (94) and 'Casual Crew' (95), but alas only one can win. Livestock Lads, from Pool A, posted a respectable 97 to defeat Hit-N-Miss (106), while 'Can-a-Hole' and The Rissoles both did a Warnie and scored 99 to blow Corn Stars and FSC away, respectively.

The team scores generally had a wide margin. Pool A managed a draw with Part Time Putters and Drawshank both scoring 109. The closest win went to Golfie (102) over F-Troop (102.5), with Nutrien Swingers (107.5) having a narrow loss to Flemming Floppers (104.5). Other winners were: Golf Harvest, Banana Split Pants, Still Trying, and Duffers.

The Pool B scores were similar, and also registered a draw. HD&SI and Forbes Auto both managed 110.5, and each presumably thinking their score was not really competitive. It all depends on how the opposing team play. The closest contest saw Par Tee on Girls (105) get past Postie (107.5). Other winners were: Bush Divas, EHAG and Flip Floppers.

As the course dries out the ball will roll and bounce favourable, and presumably lead to some good scores to be recorded. But then the handicapper will catch up to you. But oh what fun it is.

The competition recommences on Monday Jan 3, as we endeavour to make up for a few lost weeks. But we are still aiming to finish as scheduled with the Grand Final on April 3rd.

The organisers thank you for your participation and wish you and your family a Merry Christmas and enjoyable New Year. And of course we will be pleased to see you out there swing away.

There's no stopping Nym Dziuba when it comes to 'twin towns' vets golf after he cleaned up again last Thursday in the 18 hole stableford competition played in Parkes.

According to Alf Davies, recorder for the 'twin towns' competition the popular Parkes member would of cleaned up in all awards for the year if not for the one trophy per player rule.

"He was outstanding," Alf said and the same can be said of his efforts last week when he played three under his handicap winning with 39 points.

Keeping it in the host club runner-up was Cathy Kelly, also with a good score of 38 points while Tom Delminico did not have the best of finishes to the year collecting the encouragement award.

Next outing in 'twin towns' vets will be in Forbes on Thursday January 6.

President of Forbes and Lachlan Valley Veterans Golfers Associations Peter Barnes said this year served quite a few challenges but in the end we all come out pretty well considering.

"Thanks for your support throughout 2021 and may I wish you and your families all the best for 2022 along with a very Merry Christmas," Peter said.

Organiser of the Tuesday 12 hole social competition Geoff Drane had a similar message when hosting a Christmas luncheon after play last week.

"We've had a pretty good year and I thank you all for that. Merry Christmas and see you all next year and remember Tuesday golf is open to all. Come along and enjoy a hit in social and friendly company," he said.

"During the year approximately $5-6,000 was generated through green fees while we donated $1,150 to associates of the FGA, which I feel is very satisfying," Geoff added.

Winner last week was Barry Parker with 33 points from Dale Moon on 31 points.

Tuesday golf will be played every week where available during the holiday break with players to gather from 9am for tee-off on arrival.

For further details on golf over the holiday break contact the Pro Shop on 6851 1554.