First Nations leaders have condemned protests outside Parliament House, following a devastating fire which has damaged the north facade.

An official statement from the tent embassy, shared by Ms Baldwin, said they do not condone the actions of protestors who occupied Old Parliament House.

"The actions of such protestors conducting a "Smoking Ceremony" was done so without the knowledge, consent or mandate of the Embassy Council and Traditional Owners responsible for the regulation of the Aboriginal Tent Embassy," the statement said.

"Can confirm that the protest at old Parliament House is full of antivax freedom day protesters who once again hijacking our movements. Their actions are disgraceful," she wrote. ACT Policing said they have launched an investigation into the fire, saying it has caused "extensive water damage" to Old Parliament House.

"Protestors have been at the front of Old Parliament House for over a week and this morning began a traditional smoking ceremony," ACT police said.

"The fire travelled to the front facade of the before being evacuated allowing ACT Fire and Rescue to extinguish the blaze."

The fire at Old Parliament House is not condoned by the Aboriginal Tent Embassy… there is an official statement circulating that needs to be included in coverage. 2022 marks the 50th anniversary of this important protest site and I hope these actions don’t ruin for everyone

The Canberra Times understands a group of people who call themselves "sovereign citizens" - and believe laws don't apply to them - may have been involved in the protest.

"When I think of Old Parliament House, I'm reminded of our first Indigenous Parliamentarian Neville Bonner on those front steps [and] other historical moments in our democracy," he wrote.

A Greens senator also sparked controversy on Thursday after appearing to support the fire.

In a now-deleted tweet, Senator for Victoria Lidia Thorpe retweeted a video of the fire, saying: "Seems like the colonial system is burning down. Happy New Year everyone". 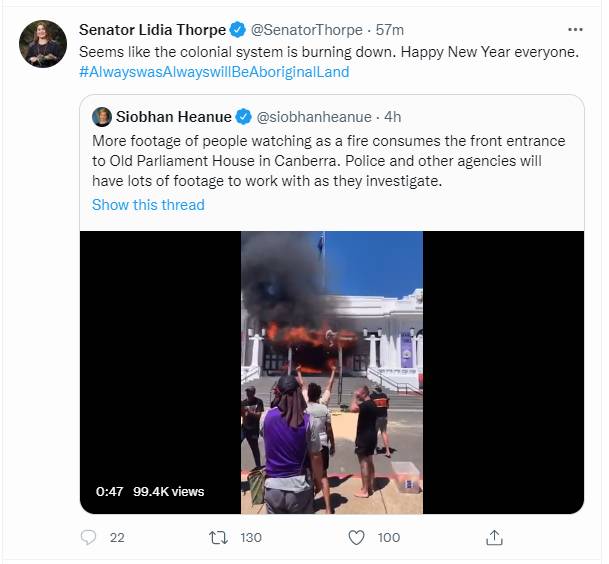 The Museum of Australian Democracy said the fire was lit at the front entrance of Old Parliament House on Thursday morning. Demonstrators holding Aboriginal flags rallied outside until about 4pm on Thursday.

"The fire caused substantial damage to the heritage doors, the portico and the facade of the building. It is currently not possible to estimate the monetary value of the damage," MoAD said in a statement.

MoAD director Daryl Karp said while they had not estimated the monetary value of the destruction, "from a heritage perspective the damage is incalculable".

"To have this sort of ... violent protest is not the way that I believe democracy should be practiced," she said.

"There is no place for violence, for destruction of property in a democracy. Protest is really about it being peaceful, lawful, and not impinging on the rights of others."

The Minister responsible for Old Parliament House, Ben Morton, described the protests as "not peaceful" and said the building would be restored.

"No system of government is perfect. In our democracy the freedom to peaceful protest is one that we can and should celebrate," Mr Morton said in a statement.

"Today's actions at Old Parliament House were not peaceful. The resulting damage undermines the message that peaceful protesters seek to deliver.

"The damage to the building will be fully restored back to its original condition."

Emergency services were called to the fire at Old Parliament House about 11.36am on Thursday. An ESA spokesperson said crews found the front doors of the building "well alight".

The building was evacuated as a precaution and the fire extinguished. Old Parliament House remains closed. 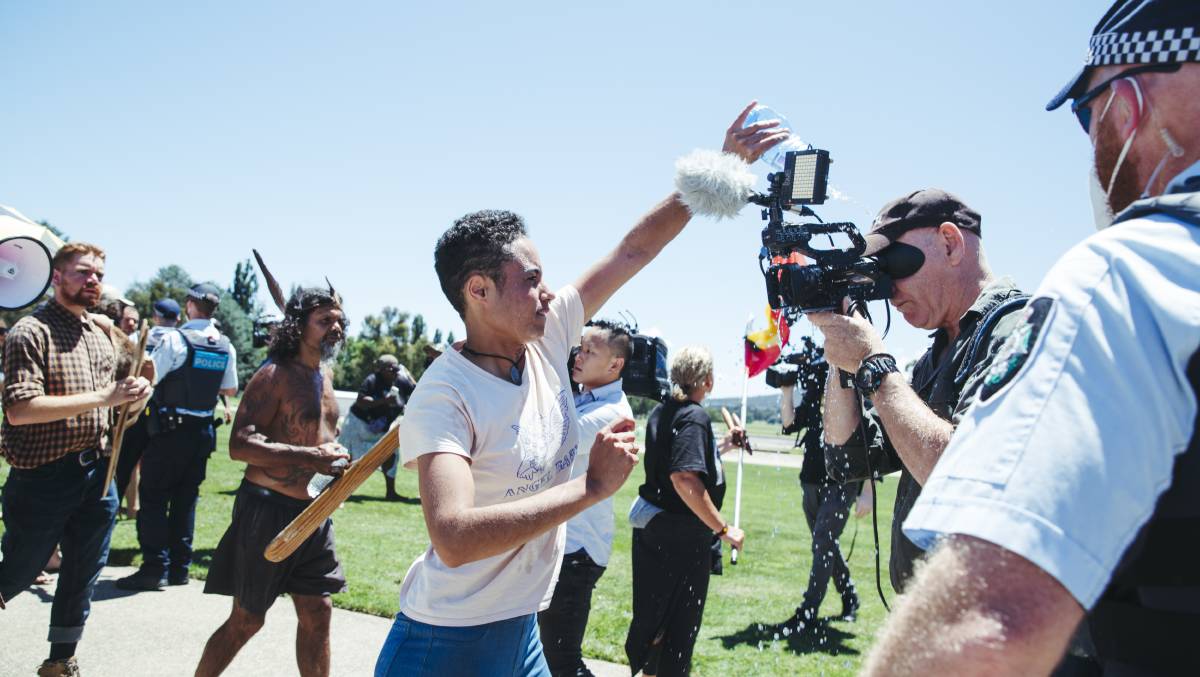 Footage shows that demonstrators were combative with media crews.

An ACT Policing spokesperson said there had been "ongoing protest activity at the front of Old Parliament House throughout the past fortnight".

Police have launched an investigation into the cause of the fire.

About 12.10pm, a fire alarm could be heard from Old Parliament House, while police had formed a line blockading access to the building.

ACT police, firefighters and paramedics were at the scene.

From December 20, First Nations people and allies have met daily at the Aboriginal Tent Embassy. Protesters said they were conducting a daily smoke ceremony and educating visitors, while MoAD said they had been protesting each day.

It is understood First Nations activists delivered what they called an "eviction notice" to the Australian government.

A man involved said protesters had earlier been occupying the front steps of the building.

He said they lit a ceremonial fire and when police arrived they began pushing those gathered. 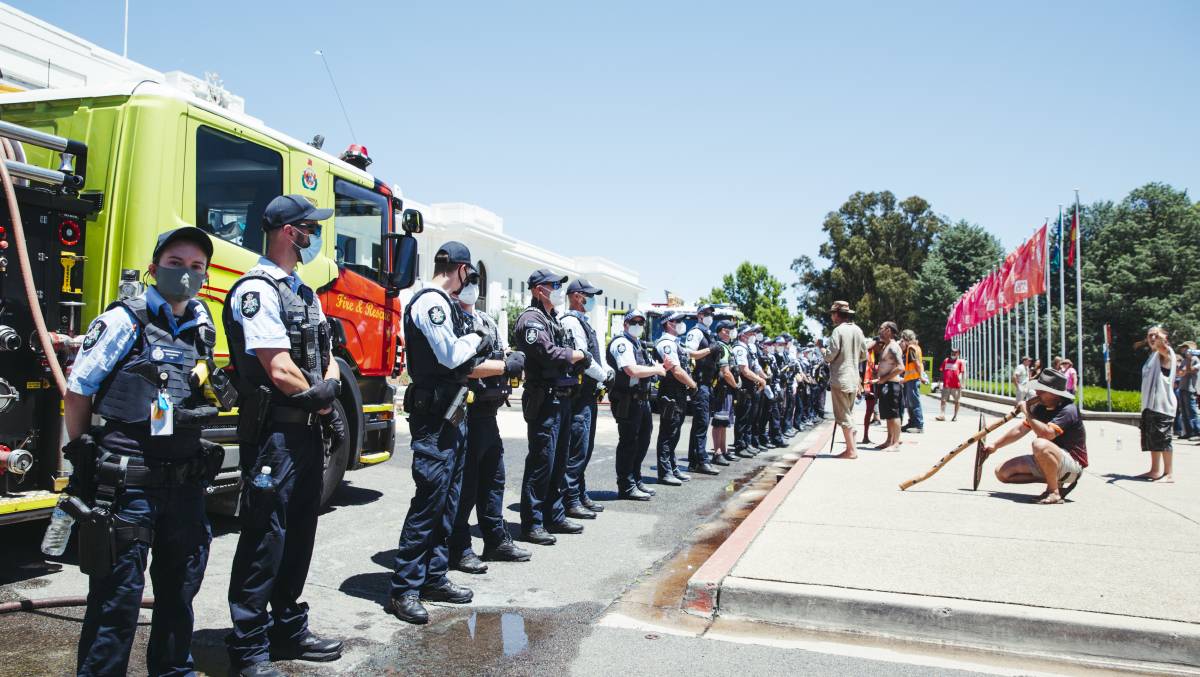 He said the inspector on the scene had stopped police interference before it escalated further.

He and another man involved said police had used pepper spray on protesters.

TheCanberra Times has been told the type of pepper spray used by ACT Policing is water-based and not a fire accelerant.

The man said the protesters had been taking peaceful action on and off for two weeks. He said the area before Old Parliament House, where the Aboriginal Tent Embassy stands, was off limits to the media and that they had "no jurisdiction".

Not long before, protesters moved back members of the media with cameras from this area, chanting "tell the truth".

However, Albert Hartnett, an activist involved with the Aboriginal Tent Embassy, said protesters did not create the fire.

"They were doing a smoking ceremony. The police [came out] from inside the building, and they came across where the smoking ceremony was taking place, and they sprayed pepper spray onto the flames of the fire," he said.

"What they did exacerbated the flames.

"It started to burn the top of the roof which now caught on fire."

First-time visitor to Canberra Cameron Duschka said he was walking by about 11.30am.

He said when he first arrived there was a group of protesters on the stairs out the front of Old Parliament House.

"A group of policemen were walking towards them and forced them back into the building. And then I noticed a small fire on the stairs," he said.

Old Parliament House was used as the seat of parliament from 1927 until 1988. It is now used as the Museum of Australian Democracy. 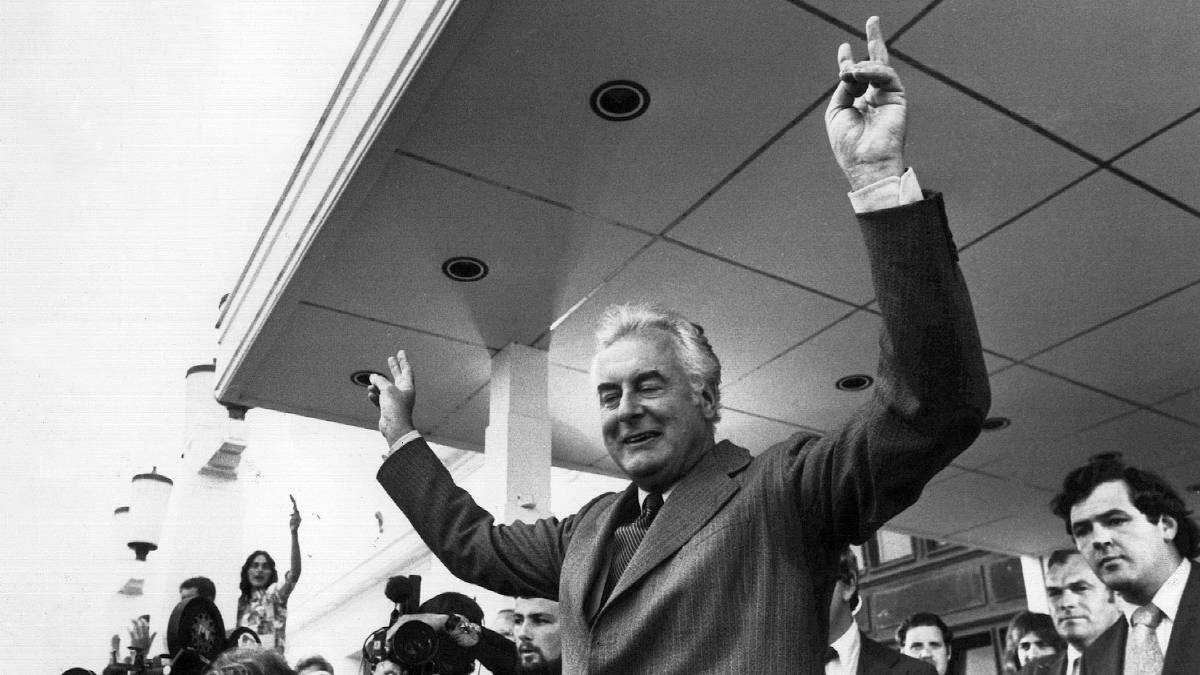 Prime Minister Gough Whitlam under the portico of Parliament House after his dismissal on November 11, 1975. Picture: Graham Thompson

He said he hoped the damage from the fire was minor, considering the historical importance of the site.

"[I hope] that the damage is found to be minimal and that good restoration is possible in the near future," he said.

"It's associated with an enormous number of really important events in Australian history. It served as the Parliament House during the Second World War.

"It was probably most famously the location of the ... speech by the Prime Minister Gough Whitlam at the dismissal."

Mr Heffernan said that, because of the embassy, Old Parliament House remained a site of democracy and protest.

"[It is a] continuing place of protest. It's really a place of democracy," he said.

The Aboriginal Tent Embassy sits outside Old Parliament House. The 50th anniversary of the tent embassy takes place in January next year.

Our journalists work hard to provide local, up-to-date news to the community. This is how you can continue to access our trusted content: