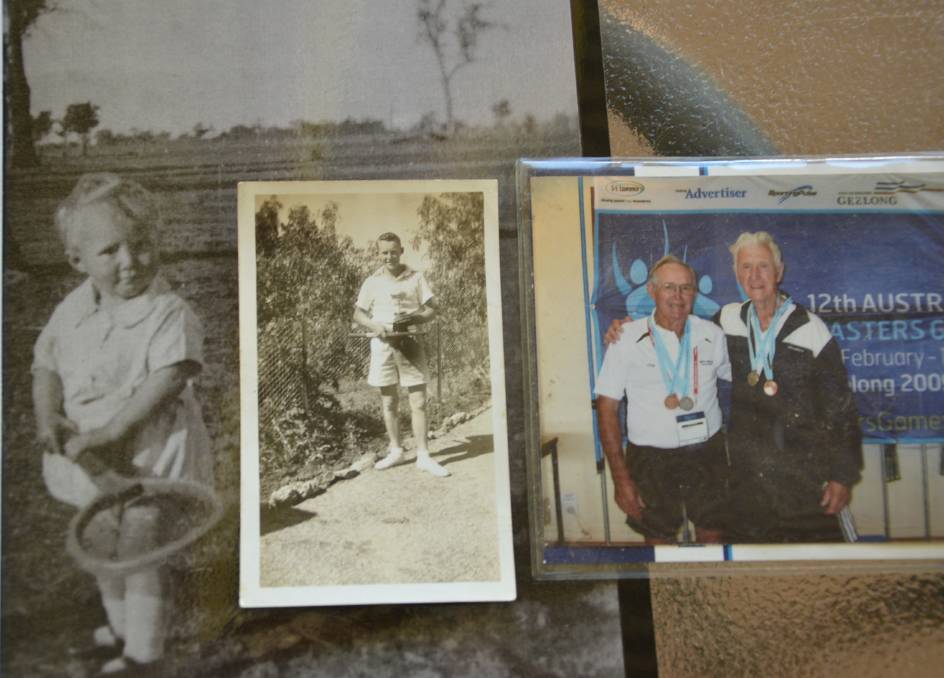 Cliff Nelson, a family man, a gentleman of the highest order and an outstanding sportsman who was born on December 28 1931 and honoured for a life anyone would be proud of at the Forbes 'Bowlie' in the lead-up to his 90th birthday.

A presentation was conducted by Barry Shine after research with his family, wife Ann and children Peter and Valerie (Maguire).

Point of interest to start with, a trivia question - how did Nelson Park get its name?

Cliff's parents were Horatio and Nancy (nee Gray). Cliff was the youngest to Ray, Don and Pam.

Cliff's uncle Arthur, who was the eldest brother to Cliff's father (who was the youngest of 9) was Head of the Lands Office and Mayor of Forbes. The park was named after him to recognise his contributions to the community which included starting the first bowling club in Forbes.

After the war Cliff's father had secured a Soldiers Settlement halfway between Forbes and Grenfell on the Pinnacle Road and aptly named it 'Nelagra', for Nelson and Gray.

Nothing unusual to hear that Cliff biked it or rode a horse for schooling at Garema and Pinnacle, which I am sure he would have reminded his children about starting with 'when I was your age ...'

Cliff, Don and their father joined partnership to secure further properties 'Hillview' and 'West Ooma' in the district which later became 'HV Nelson and Sons'.

Many will tell you of Cliff's work ethics - he was a master of it and the land.

Cliff could do anything when asked around the farm. He was head mechanic, the butcher and was also handy with the knitting needles, thanks to Nancy and Pam.

I believe his shearing skills are self taught with some guidance from old Phil Quirk at 16 and started shearing his own sheep to later become a master of the blade just to add to his bag of tricks.

At the presentation was John 'Slippery' Ward who spoke highly of Cliff's start as a paid shearer.

"We started together, on the same day and Cliff was 63 at the time and he shore more than me that day," he said.

While the farm held a fair bit of interest Cliff also had an eye for the lovely ladies of the district. I believe Cliff had a nick-name all young men would be proud of. I will keep that between me and you Cliff ... unless you want to tell.

Cliff did meet his match when a lovely young lady by the name of Ann Penfold moved to teach in Forbes. Cliff caught Ann's eye at the tennis club and decided she was the one, naturally much to the disappointment of other beauties at the time.

Ann and Cliff married in 1963 to witness the arrival of Cherie, Peter, Leonie and Valerie. Sadly, Cherie passed away around two years ago.

Naturally Ann and Cliff are extremely proud of their seven grandchildren.

Lucky for them they have been blessed with Cliffs sporting genes with NSW junior representatives for rugby league, basketball and netball amongst them as well as a Sydney Swans Academy player and state high jumper .... unfortunately, no tennis players!

This brings us to sport - and boy wasn't Cliff good at it, especially tennis.

In 2007 Cliff was awarded Senior Sportsman of the Year for his success at the Australian Masters Games.

Tennis almost did win one day ... in 2012 playing Monday night tennis he wasn't feeling on his game, instead of stopping he finished the set, of course. Arriving home looking and feeling unwell Ann shot him off to hospital which finished up with the master in Sydney after suffering a mild heart attack. We blokes carrying a bit extra take note.

Cliff decided to shift his attention to golf and while I cannot find any record of major wins you would think he also mastered the game.

After his health scare and looking for a further sporting challenge Cliff thought, what's next? With the tennis racquet and golf clubs packed away, bowls is the game today - and while no major A grade titles (I think) we all know Cliff is a winner in more ways than one. He took to bowls in the same competitive attitude and was determine to master this game as well.

Only last week he lowered the colours of the clubs most recent state representative in Leisa Burton in the Bentick Trophy. A handicap event Cliff received nine start but with the final score 21-8 that had little bearing on the result.

After Leisa was full of praise for Cliff commenting how well he had played, "He belted me, he sure can play", she said after. So true.

Cliff, I think it's time we looked further at your outstanding tennis record.

Cliff's father was a good tennis player and encouraged all his children to take up tennis by building a tennis court out on the farm.

Cliff being the youngest was tasked with being the ball boy along with his collie named Wing, who he trained to fox the balls that went over the fence.

When Ray went off to war, Cliff at the age of 8 went from chasing the balls and hitting against a tongue and groove wall to being able to make up the four with his father, Don and Pam.

After the war he started playing at the town tennis courts at the age of 13 in A-grade and won his first mixed doubles the following year at 14 with Marj Walker (Tuppy Drabsch's mother).

At 15 he was chosen from the area to go to White City to a coaching school, which ended up being the only formal coaching Cliff ever had.

At 17 he won the U/18s NSW Hard Court juniors which was held in Parkes and followed up winning the same title the following year at 18.

At 21 he was playing in Country Week at White city alongside the likes of Ken Rosewall and Lew Hoad who by the way headed off to play Wimbledon in following years.

He won his first A grade Singles title at the Forbes Tennis club at 22 in 1953 and again in 1954. During the 50s there was years of flooding which meant the roads were cut to Forbes from the farm which meant Cliff would miss the Forbes Championships for a few years and also meant the Nelsons headed to Grenfell where they played a majority of their tennis.

However, may I add that if it hadn't been for a master of the game in the name of Ken Rose, Cliff's record here in Forbes would have seen many more majors.

In his 20s, before marriage, Pam, Cliff and Don would travel all over the district playing and winning tournaments in Young, Cowra, Wellington, Trundle, Wyalong and Parkes.

At 32 he met and married Ann and soon they welcomed the arrival of their four children. Keen for them to play tennis Cliff would head off with the four kids to Grenfell every Saturday afternoon. According to Ann, she would look forward to Saturday afternoons all week to get some peace and quiet.

Around this time, Cliff teamed up in Grenfell with his long-time doubles partner, Alan Heathcote, who had much younger legs than Cliff, and together they were a very successful combination around the region.

Their main rivals were the Woods brothers from Wyalong who they went back and forth for years winning and losing to and were always great matches to watch.

In 2007 and 2008 Cliff played at the Australian Masters Games in Adelaide and Geelong taking home medals both years in singles, doubles and mixed.

In 2009 he then played at the World Masters Games in Sydney where with his partner John McCarthy they won Gold beating teams from countries including Italy, Canada, Croatia and Brazil.

After 55 years in A Grade, Cliff decided to leave A Grade to the young guns and was allowed to play B Grade winning two singles titles in 2008 and 2009.

He also won doubles with Matt Dunn in both those years and claimed another in 2012 with Doug Hurkett.

Over the years Cliff was a regular at Intertown and Shield matches for Grenfell and then Forbes and he also played in Veterans and teams events around the region.

Last year Cliff was invited to speak at the opening of the new Town Tennis Courts and the new clubhouse roof as although he no longer played he was one of our longest serving members and still appeared from time to time at the courts to watch the youngsters play.

"He liked to catch up with all the good young players at the club," they said

From our earliest records which start in 1954 at the Forbes Tennis Club:

There is no record of him winning any Mixed Doubles championships but there were numerous mixed events such as the Dot Hodder that he won.