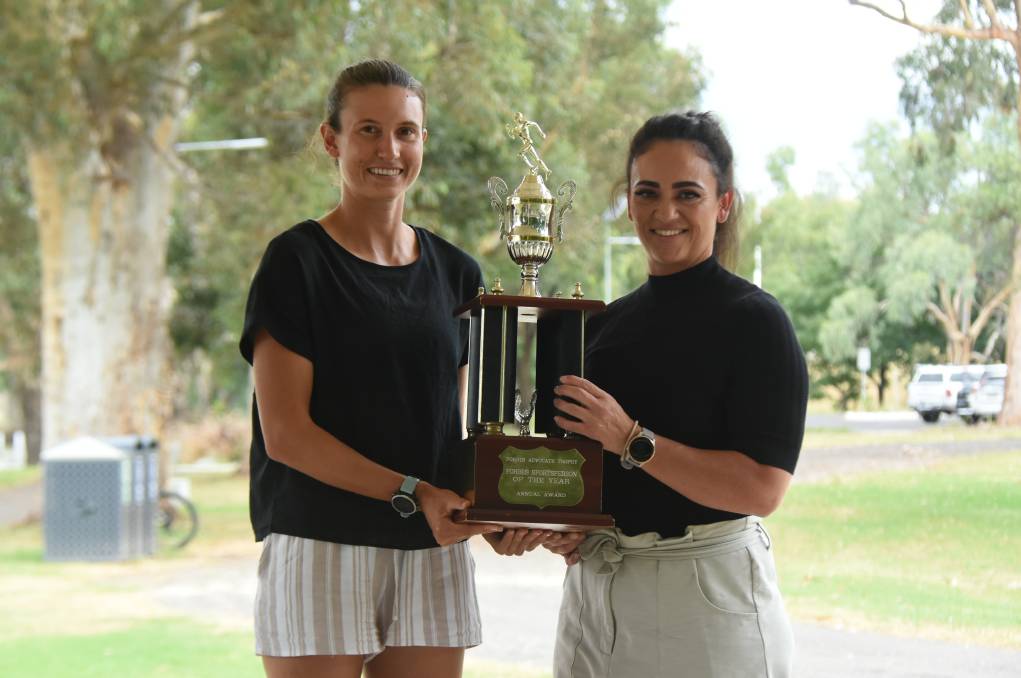 Kettlebell world record holder Haylee Redfern has been named our Sportsperson of the Year for 2021.

Hayley claimed two firsts in the IKMF World Championships in her sport, set seven Australian records and placed first and third in national championships in the past year.

Her achievements were acknowledged locally when she was presented the Forbes Advocate trophy at the annual SOYA presentation by Jessica Pascoe, previous winner and champion runner, by Lake Forbes on Saturday.

Kettlebell is a weightlifting sport and Haylee's wins were in the marathon style of competition: no gloves, no rests, just a solid 30 minutes of lifting.

She took out first in her class in the long cycle - a clean and jerk action - completing 327 repetitions, and first in the short cycle - straight shoulder to overhead jerk - completing 423 repetitions.

The world titles were contested by athletes from 16 nations but Haylee and the Australian team had to compete remotely due to COVID-19 restrictions.

For Haylee, a personal trainer and Eugowra's Active Farmers coordinator, it's the fruit of countless hours of early morning training sessions in the home gym.

Read the full story of Haylee's world championships experience in our earlier feature - what an extraordinary achievement and we wish her all the best for future training and competition.

Forbes Services Memorial Club Runner Up - Tom Drane, motorbike racing (Forbes Services Memorial Club): Tom was one of three riders to represent Australia in the Asia Talent Cup in 2021. Aged just 15, he was one of five rookies in the field of 23 athletes up to the age of 21 and achieved a top 10 finish at the end of the first two rounds of competition.

Tom claimed his third NSW Junior Dirt Track Championship for his class in 2021, placed second in the Oceania Junior Cup at the Australian Super Bike Championships, and in his first race at the 300 Supersport.

Gunns Menswear Senior Sportsperson of the Year -Justin Roylance, jetboats (Gunns Menswear): Justin made a huge impact in the first two rounds of the Penrite V8 Superboat championships winning both rounds of the international 400 class Group A competition - not bad after a year off due to COVID restrictions. Unfortunately the competition was put on hold again, resuming just this month. Justin is also the president of the Australian Jet Sprint Association.

Claire, who has been racing since she was eight, is now in the fastest category in junior dragsters covering 200m track in under eight seconds at speeds of exceeding 130km/hr. Claire, the only female currently drag racing west of the Blue Mountains, finished in the top seven in the 2021 Australian National Championships.

She recently competed in the opening meeting of the 2022 Top Fuel Australian national season, winning many elimination rounds to take runner up in the final.

In 2020 the 12s progressed through the season undefeated to secure the title for the first time in the club's 25 years in the competition. Not only that, they did it again a year later.

President's Award - Forbes Junior Cricket Under 12s: This team won back-to-back premierships in 2020 and 2021, claiming Forbes' first victory since 1985/6 in the combined Lachlan and Macquarie Under 12's Representative competition.

Hughes and Co Solicitors and Conveyancing All Round Sports Achiever - Annabelle Dwyer: Annabelle has represented the Lachlan Public School Sports Association at Western trials in netball, touch and swimming.

She represented her school in cricket, soccer, netball, touch as well as dance, and is a member of the Kristen's School of Dance Under 12s troupe.

Annabelle was Forbes Fins Under 10s runner up age champion and was awarded the Mary Messner inaugural trophy for most determined swimmer in the club; plays league tag and touch football.

He coaches Under 8s, serves as referee and linesman at home and away games, for Red Bend JRL and for opposition clubs when they are short. He is also an accredited Touch referee.

Forbes Netball Association Terry Wade Award - Andrew Hubbard: Hubbard celebrated his 400th senior game with the Forbes Platypi in 2021 and he's just as active off-field as on. He has held positions including captaincy, coach, mentor, executive and non-executive committee and stepped up whenever needed. He was instrumental in organising a fundraising and recognition day for club stalwart, Tracey Prior.

Forbes Shire Council Fair Go Award - Forbes Pony Club: Forbes Pony Club has provided the community with facilities and competitions of a consistently high standard. Their inclusive approach allows members of all abilities to participate and enjoy the sport.

HelloWorld Travel Special Sports Award - Sophia Angrave: Sophia has shown tremendous improvement in her efforts towards sport. Sophia represented Forbes Public School at Lachlan level in Athletics and has brought this experience and leadership back to school to assist her fellow peers.

A small group of people makes this incredible awards event happen each year - our hats are off to them.

They're also already taking nominations for next year's awards so as your finals progress or sports achievements occur make sure you go to their Facebook page or reach out to the committee members and get those nominations in!