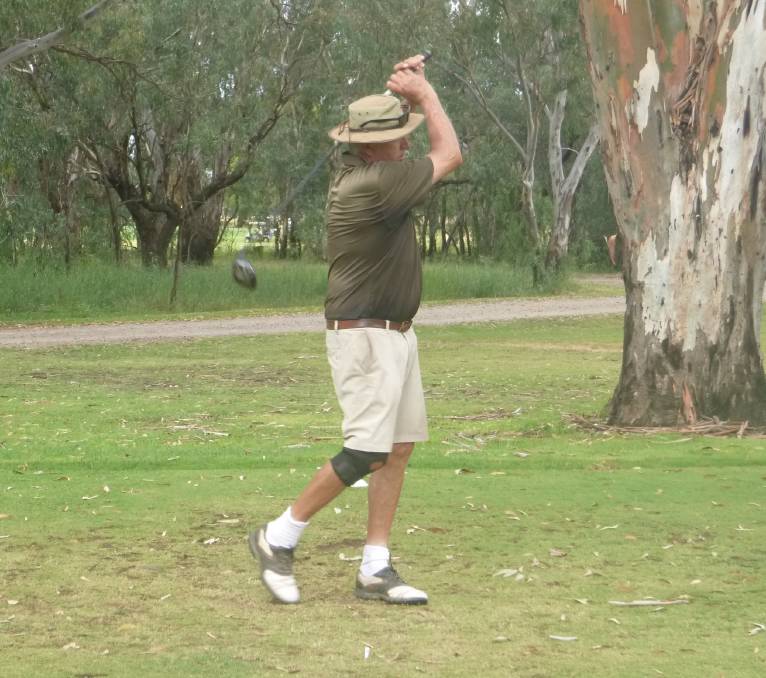 Stephen Uphill follows the flight of his drive intently.

Conditions on Saturday were generally good for golf, despite some clouds building in the east. Players enjoyed good run on the fairways and also managed the greens well with many favourable scores recorded. But the day belonged to two young guns.

The field of 54 players was a bit light on in comparison to previous weeks, despite numbers being bolstered by ladies competing. Most pairings combined well with all but a few getting at least one birdie on the cards.

The winning pair of Harry Callaghan and Tom Toohey combined extremely well to finish on +12. They did not miss a beat all day, scoring six birdies, including a '2' on the 9th, and never a 'minus'. They scored +6 on both 9's, with a 'purple patch' of birdies on holes 13, 14 and 15. They shouldered the burden fairly evenly with Tom's handicap assisting on a number of occasions.

The Runners-up were Jeff Haley and Craig Simmonds who finished on +10, on count back. They started slowly but finished strongly on the back-9, scoring +7, and also did not record a 'minus' all day. They interspersed wins with halves for most of the day, but had the best run on the last three holes with a win on each. They also combined well to share the burden.

The NTP's went to - 9th: B Slack-Smith; 18th: R Webb, with only Brett converting. They were both so close early in the day that nobody else came near them.

There were ten 2's, which is a high strike rate for the size of the field. Unfortunately, none of the ladies managed a tee shot on the green for their NTP's.

The 9th hole was the easiest to play with five 2's scored there, and one being the NTP. The 3rd hole had easy putting also, not the least being Heather's very short 'almost tap in'. And then Stephen Uphill did not need his putter for his '2' on the 1st hole, chipping in from around the trees.

The 3rd Hole Super Pin went to Heather Davidson, who was getting very excited. Her tee shot flew straight at the pin, and when the ball landed it seemed to run directly for the pin to seemingly disappear.

When Heather got to the green her ball was only 21 cms short, having settled in a shallow dip before the hole. This helped Heather and partner Nicole Death finish in fourth spot. Unfortunately the other ladies pairing finished well down the field on 'Square', but ahead of some of the men's pairings.

There were three 'swinging pairings' in the field. Interestingly, only one of those groups had any success for both pairings.

Jacob Reid teamed with Luke Flakelar and Mike Brindle to finish 3rd and 5th respectively. However, the other groups of swing pairs did not do so well.

Brett Slack-Smith's pairings finished in 12th and 19th, while Dave Mylecharane had a 6th and 28th finish. Perhaps rarely do all players in a group play well at the same time.

There are always easy putts and difficult putts during a round and experiences scattered throughout the field. Heather Davidson had one of the easiest putts of the day, for a good reward. But Jeff House had one of the hardest putts. His 2nd shot to the 12th green was a low runner, having to come from under a tree.

The ball had enough pace to roll up the mound at the back of the green, but then settled there. After sizing up the most appropriate line, Jeff tapped the ball, enough to get it started but not too much. The ball looked like it might go in but in the last few inches it slide to the side finishing about 10 inches past the hole. In the end, it was an easy but interesting par.

An obvious way to dispel any putting dramas is to chip in. Steve Uphill started his day with a chip in on the 1st hole. But son Simon was not to be outdone.

On the 17th his tee shot sliced (he is a leftie) onto the 2nd fairway. He played down the fairway. Then his next shot was meant to carry the longer grass and roll onto the green, but it snagged up. No problem, as Simon chipped in from the rough grass left of the green.

One visitor, Peter Jackson, enjoyed his day, seeming to feel quite at home. It was not the good banter from within his group, but he commented at one stage that it 'felt like home or playing at Nambucca Heads'.

He was referring to the passage of players wandering across many fairways as they chased their balls after hitting trees and rebounding in all directions. I am sure there would be no fun in a 'links style' course.

On Sunday the Forbes Men's Pennants players travelled to Wellington, where they played Parkes in the Div 1, 2 and 3 teams. The Div 4 season has finished.

Here is the news: The 2021 Men's and Mixed Trophy Presentation, is due to go ahead on Sat 12th March, after the Saturday comp. Of late, there always seems to be a conundrum to solve. And do not forget the 3-Person Ambrose, scheduled to be held on Sun 20 March.

Andy Dukes has a big smile on his face. On a recent golf trip to Cobrah-Barooga GC he managed a Hole-in-One. Another one to add to his memory bank.

It is crystal ball time: On 5th Mar, the Men play the March Monthly Medal, sponsored by Michael Robinson & Co. The Ladies revert to their programme, with their event a Stroke, being the 1st round of the Golf NSW Medal. Sun 6 Mar has a Stableford Medley. There is also the Men's Pennants at Dubbo.

Players found it difficult to register good team scores. Perhaps the tension is building as players want to do well to ensure their team wins each week, but are also mindful to not have their handicap drop too far before the finals.

Even so, there have been some competitive team scores and outstanding individual efforts. There were no sub-100 team scores made, but in Pool A Golf Harvest (100) almost made it. The next best was 102.5 shared by Still Trying and Drawshank. The best in Pool B was 101.5 scored by Bush Divas who appear to be finishing strongly. Behind them were Flip Floppers (102.5) and Walkers Two (103.5).

Other winners were: Pool A: Part Time Putters, Golfie, Cowhands, F-Troop and Hit-n-Miss. Livestock Lads had the bye. In Pool B: FSC, Postie, Walkers One, EHAG and Forbes Auto had wins, while HDSI were on the bye.

There is a real tussle for the Top-5 and Second-5 from each Pool to go into the Finals Main draw and the Finals Plate draw. In the Pool A Plate, Part Time Putters need a win to consolidate their spot, while the 5th spot in the Pool B Main draw is up for grabs between 'Just for Fun', 'Casual Crew' and possibly EHAG.

At the end of this week handicaps can be adjusted downwards but not upwards. During the Finals weeks all handicaps are frozen. The Finals draws will be posted on Monday 7 March. IN the draw there are 'sudden death' matches as well as 'second chance' matches, so keep striving for that prize.

Members in those teams who do not make the Finals draws are encouraged to still play and enjoy the benefits of the summer daylight saving. No doubt you have a thirst for golf now so keep drinking it up.

Good luck all in this last week of round-robin play.