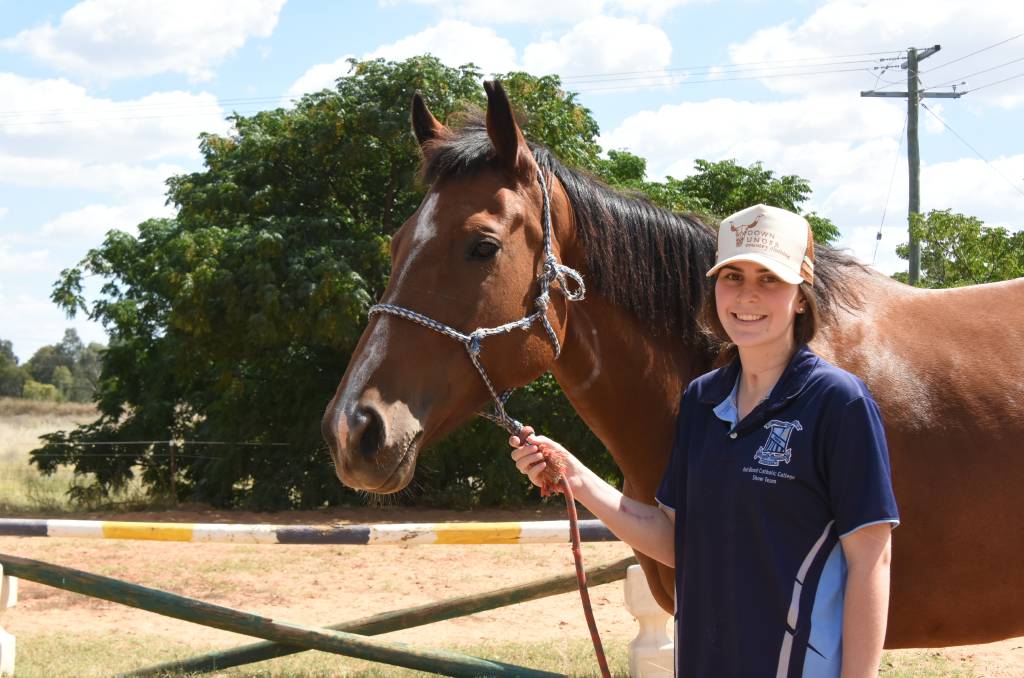 This girl is a hell of a survivor.

It's a mere five months since 15-year-old Chelsie Farmer was flown to Sydney after a horror traffic accident - not expected to survive the flight - and it's almost unbelievable to be sitting across the table from her, hearing her chuckle.

Forbes rallied in support of Chelsie and her family when news spread a few months ago, so we were delighted to catch up with her along with her mum Sandy, her nan Sue, and her Pony Club coach and family friend Laurie Norris to talk about her remarkable recovery.

Chelsie has been home for about a month now, surrounded by family and her beloved Forbes Pony Club community - and horses.

Her journey back to physical health and strength is ongoing, but her sights are set firmly on the day she can get back in the saddle and resume work towards her dream of representing Australia at an elite level.

"She's a real fighter," her nan Sue says - and nobody's going to argue with that.

The injuries Chelsie sustained on October 22 last year are nothing short of horrendous and Sandy recounts the agonising hours that followed.

"(The helicopter) had to land at Orange for more blood," Sandy remembers.

"For nine hours I sat in a waiting room waiting to find out if she was going to survive surgery or not.

"She died three times in surgery (on the first night)."

The injuries Chelsie describes are severe: her lungs collapsed, her stomach suffered severe damage, she lost 97 per cent function in one kidney - in fact her heart was the only organ not affected.

She would remain in a coma for two months and undergo 12 more surgeries.

Night after night, Chelsie's family and their tight-knit support group kept watch as her blood pressure and other vitals fluctuated dangerously.

"We had a few curveballs thrown at us: it took a long time before they told me she was going to be out of the woods - that was their description."

Chelsie's foot was so severely damaged it had to be amputated; numerous bones in her leg and arm were broken, and her knee "was pretty much smashed".

Chelsie regained consciousness in Westmead eight weeks on from her last few minutes of memory from the roadside in Forbes.

"All I wanted to do was go home and see my cat," she remembers now of waking.

"Mum told me heaps of times I lost my foot, but I didn't remember until they wheeled me into an elevator and I saw it in the mirror."

In those early weeks she still had a tracheostomy so could only communicate by writing on a little whiteboard, and it would be a long time before she could stomach food again.

"When I got there she couldn't talk and I was quite excited about that," Laurie laughs.

"I got sick of asking people to do stuff for me - on the whiteboard - so I taught myself to talk through it," Chelsie points out.

"The first time I made a noise they all turned round and looked at me."

The sporty, outdoorsy, girl from Forbes found being confined to a hospital room in Sydney tough going - even tougher when she had to isolate in the room with her mum for just shy of two weeks during COVID-19.

A good sense of humour - they all agree - was absolutely essential. As was the support of family who brought them a kettle and Uber Eats deliveries.

They knew they had the support of everyone back here in Forbes, and they're so grateful to all those who supported them in many ways, right from the time and scene of the accident.

Laurie and Rachel Norris were on the phone every day - urging her to hang in there every single night she remained in a coma.

Donations for a quickly-organised auction night flowed in, raising $30,000 in one night to support the family and provide for Chelsie's ongoing medical costs.

The Catholic school communities in Forbes and beyond were praying, Red Bend holding a special mass for the Year 9 student.

"I work for St Laurence's and Bishop Columba on the Saturday did a special service for Chelsie, I had all of the diocesan Catholic schools praying for Chelsie," Sandy said.

Sandy had friends at her side, while Chelsie's siblings Lachlan, Callum and Sophie spent hours by her bed.

While the COVID outbreak occurring at the time made things more complex, there were friends who went to all lengths to travel to Sydney and spend time with Chelsie.

"She had plenty on her team," Laurie says.

Chelsie had the support of nurses who played her favourite music - Eminem - for her and who sought out big computer screens for her to watch Netflix on rather than the iPad or a phone.

She describes her physio team as "the best" - she even taught them to crack a stockwhip in the playground built for children's therapy.

"COVID was difficult but the hospital was amazing," Sandy acknowledges.

Ronald McDonald House was also an absolute blessing, with enough beds for the family able to stay together as well as much appreciated kitchen and laundry facilities.

But there's no place like home, and they're based back here now although they will have ongoing appointments with specialists.

"Just about the first thing I did was make a beeline for Laurie's and go for a drive around the horses," Chelsie says.

She can only pat and talk to them though - she's been advised not to ride for six months, and not to showjump for 12 months.

That's a tough call for a girl who's been riding all her life, taught along with her siblings and cousins by her grandfather who sadly passed away in early March.

Pony Club and a clever little horse named Misty, bred by her grandfather, have been absolutely central to Chelsie's life.

Under Laurie's guidance she'd begun showjumping on Blossom, a bay mare, and they all agree she has huge potential.

While it's frustrating right now, nobody doubts Chelsie will be back as soon as it's safe for her to do so and she has the right prosthesis for showjumping.

"Chelsie is one of the most talented riders to come to Forbes Pony Club as a little kid," Laurie says. "She'll be back."

"Bigger and stronger than before," Sandy adds. "She has big ambitions, big goals."