Harry Coggan passed away 22 February 2022, aged 96 years. His requiem mass was at St Laurence's Church on February 28 and this eulogy was read by grandson Tim Prior. 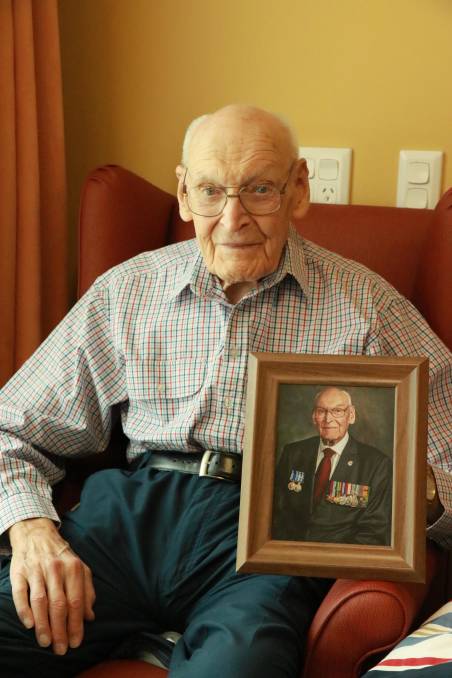 The late Harry Coggan, holding the portrait taken for Reflections, honouring our WWII veterans project and now at the Australian War Memorial.

Henry Phillip Coggan was born in Avondale, near Morriset NSW in 1926 to Anastasia and Charles Coggan. He was the last of eight children.

I am going to attempt to condense the 96 fulfilling years of Harry's life into a few short words. For those who knew Harry no fine detail was ever missed in any yarn told, so my attempt may not be up to Grandad's standard.

As a child Harry grew up in a small community with a big family. Times were hard when he was young.

Their father worked in the local bakery, while struggling through the Great depression and scarlet fever pandemic, he considered his family extremely fortunate to have a hot fresh loaf of bread every day. A luxury that not many were not afforded.

Harry left school at age 15 to begin a trade as a carpenter, which would become a lifelong passion.

He joined the army corps and moved to Townsville to enlist with the RAAF as an air frame fitter as soon as he turned 18.

His service took him to Morati, Indonesia and his first tour of duty as a member of OBU61 was in the allied landing of Japanese occupied Tarakan on the 1st May 1945 as a 19 year old.

His unit then moved onward to Borneo and he continued in service as a leading aircraftman until demobilisation in March 1946.

After Harry's war years he would proudly march at every Anzac parade in every town he lived and once in Forbes a tradition was born with mum and us kids, we would march with him only ever missing one year.

There was disagreement in the later years when mum needed to strongly encourage that it was time for dad to stop carrying the Air force flag.

He took great convincing to accept that as a 90 year old it was ok to sit down at the service if he needed to.

Even up until last year these days would always end up being an epic event with friends and family.

A major highlight for him was when he was invited by the Canberra War Memorial to be filmed and interviewed about his service history.

A special treat was organised for him to do a private tour of the Memorials off site Facility, enabling him to have photos taken alongside aircraft that he had worked on and seen many things familiar to him from Tarakan. This meant a great deal to him.

At age 20 he joined the NSW Police force in Granville and was a policeman for the next 38 years.

Harry met his to be wife Noreen while based in Hay. They would then transfer between seven towns until finally settling in Forbes, where he retired.

There are countless stories of Harry in his police years like the time there was the rumble in Victoria Park with a bikie gang which left a number of Police and bikies requiring medical treatment, and how he insisted every day that he or one of the officers would walk the town and streets to be seen and heard by the community, something that he was highly regarded for by the locals.

His policing years were rewarding and fulfilling to him and many fellow officers much younger than him always acknowledged and made him feel still part of the police family.

Until very recently he would still be taken on lunch trips by a special group of retired local officers, something he always looked forward to.

Theresa, the oldest, and Harry, were so very similar in so many ways, something none of the family were game to point out to either of them, but she followed in his career footsteps and became a policewoman, which he was very proud of.

Phillip coming home with his family was always a highlight, and would cause a sense of excitement throughout the house.

This would often involve whisking him off to the pub so he could show Phil off friends. We all remember a game of backyard touch footy with all the family that that gradually became very serious.

Harry at 80 years old running the ball up hard and straight and connecting with Phil's shoulder right in the ribs.

A week later Harry needed an Xray. Thankfully, no broken ribs however Dr Somes laughed in disbelief at the cause of his injury.

Ann-Maree has so many stories and would often tell us how a formidable 6 ft 2 policeman carrying a side arm, ruined her teen years.

The most memorable including picking her up in the bull wagon and then literally grabbing kids off their BMX bikes from the driver seat, for tail gaiting the buses.

Parents of Mum's friends would call on him to give their kids a bit of a scare to straighten them out and he would visit the school on a regular basis to show a presence for the principals.

In recent years our family would grow again with the Canberra connection, and he realised that there were now fresh ears to hear all of his stories. They too became an important part of Grandad's life and he would look forward to their visits.

Mum was so many roles to Grandad throughout his life and we would laugh and often grimace at some of their constant battles.

Even in the final few years of his life, Mum could not iron his clothes and creases quite right, and when she would cook a meal that he usually loved, he generally wouldn't feel like it at the time.

At least by this time, Mum had learnt that fruits and salads were a solid NO, and unless a meal or coffee was too hot to touch, it was deemed inedible.

Telling Grandad that he would no longer be allowed to drive was one of the toughest of tasks of all. This was the spawn of many heated conversations.

The Forbes Bowling Club was a major part of his time in Forbes, and he played representative bowls across the state.

This was where he became a part of a tight regular group of long-time friends.

Nan would often refer to Grandad as a social butterfly, and would question if he possibly enjoyed the social side more than the bowls...Which we all know to be true.

Grandad became an avid Forbes Platypi follower when the grandkids started playing and Saturdays would eventually find him perched up near the bar amongst the old boys, with a can in his hand.

If something happened to one of us on the field, a recognisable voice would be heard across the field with a walking stick pointing from the crowd.

The regulars of the Postie Hotel, both young and old, would have many discussions with him over pub protocols.

After 96 years, he still struggled with the concept of a shout.

While sometimes he may have gotten a little socially excited, we always knew he was in good company, and at the end of the day Grandad and property would be returned safely home.

As the only grandchild living in Forbes, my dealings with him are so many. But one we would all laugh at is being mid-way through a job and having grandad lob up on a worksite demanding we go to the Inn for another counter lunch.

The women at the Inn came to know him well, and an extra hot version of the regular was always promptly served. Once again payment terms were not optional.

Until the very end, Harry's Pride didn't falter. Appearance meant everything, and he was very strong minded, with a wicked sense of humour.

He was stubborn to his core, but always polite, kind and extremely generous. His impact on this community has been profound, and his devotion to the people in his company shows in who has gathered to pay him respect. Our family thanks you.