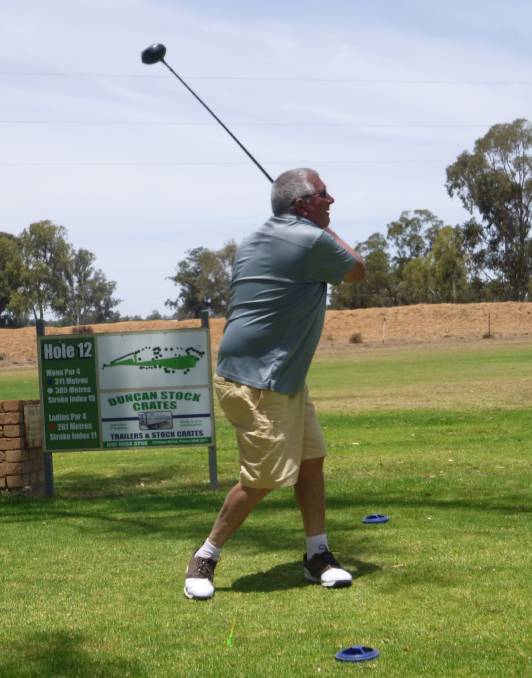 Eye on the Prize: Ralph Baker keenly watches the result of his tee shot.

On Saturday the Men's competition was the December Monthly Medal, sponsored by Landmark Forbes, and contested by a field of 76 players including a Junior. It was easy to see that the golfers wanted to invest some effort into their game, to grow in confidence, and to reap the rewards of good on course management.

Most of the A graders relished a good day for scoring, with Peter Dawson firing especially well to have a scratch 69, nett 66 and thus grab the Medal. His front-nine was very steady, whereas his back-nine was erratic but also where he played his best golf, scoring three-under 33. Runner-up was Ethan Gaffney, who sat in the Golfie with a nett 69 and anxiously watched as each played scanned their cards. His front-nine was quite erratic, but fortunately his back-nine was quite tidy and where he snuck past Alf Davies for the honours.

The B graders were of a similar mind to use the course to their best advantage. Clayton Alley relished the calming influence of his group, played very well on the back-nine and recorded a nett 65, the best score of the day. Consistency was what earned him the Medal. Runner-up was an early starter in Robb Webb. He had the lesser handicap, managed to blitz the front-9 but then could not 'buy a putt' on the back-nine and managed eight fives and a lone four.

While the scores in the C grade were higher the intensity was not diminished. Denis Culley bookended his round with pars on the first and 18th and was steady throughout to record a nett 73 and put the Medal around his neck. Runner-up was Hamish Steel-Park who carried on his recent good form and fired in a nett 74. Whilst his handicap helped to smooth out the eights on the seventh and 15th, he did play well on all the other holes and managed to get past Robert 'Rocket' Scott on count back.

The NTP's went to; ninth - M Prior; 18th - P Pymont. Michael got his two but Paul missed out. The greens were definitely tricky with only three twos scored all day. Ethan Gaffney was unlucky to score his two on the 18th, but from outside the NTP marker. A welcome also to visitors from Bogan Gate (Steve and Adam Edwards), and from Hervey Bay (Brad Hazell).

We welcome back some absentee golfers returning from injury and other life-changing experiences. Bob Grant still swung sweetly, Peter Grayson enjoyed his cart in the hot weather, and John Boyle managed his first round for a very long time. Also back, and very pleased to be swinging the club, was Ron Morris. Under the caring wing of Scott Kirkman he managed to break 100 in his first game for over 6-months.

The game of golf can be quite relaxing if the walk is pleasantly down the middle of the fairway. Then again some players like to take the scenic route, while others take an extensive pathway.

One such player was attempting a world record whilst playing the 15th hole. His tee shot was errant, but his second was even worse, finishing on the ninth green after assistance from trees on the tenth tee. Then his recovery went awry and he had to drop off the 18th green. A concerted effort of concentration saw him pitch onto the 15th green, looking at a par putt. The ball finally fell into the cup three shots later. Matt Duff can be proud of the fact that he played three greens in the one hole.

The putting part of the game can bring players to their knees. It is not unheard of to see players three- and four- putt greens, as did Anthony Alley and Scott Kirkman. And yet others like Jeff Haley find putting so easy such that they 'putt the lights out'. In Jeff's case he managed to save par on many occasions, or more importantly recover from some lesser quality shots getting to the green.

But a new one was putting OB. Neil McMillan had a 'Brockie' behind a gum on the 7th. He played safe by using his putter to get onto the fairway, but unfortunately he was a bit strong and the fairway was dry, thus ensuring the ball travelled across the fairway and snuck under the gate to go OB. His next attempt was better.

Golf is a sport that can be enjoyed by the family. One such group saw Peter Cowhan smote the ball alongside family members Dan Bayley and Ben Robinson. John Boyle was an interested bystander, enjoying the banter between the other three.

Another who is developing a reputation as one who can 'smote' the ball is Robert Scott. Playing alongside Hamish Steel-Park, he was keen to keep pace. His second on the 16th was hit with gusto, but also had a real 'gusto' slice. The ball shied over the 17th Ladies tee, hit the dry ground beyond and ran all the way onto the second green. Hid did manage a small recovery, keeping the damage to a seven.

The Sunday conditions threatened to be hot, which resulted in a small Stableford Medley field. But those who played were keen to get done quickly, which may have affected their scores.

Greg Webb took the honours with 35 points, being well ahead of the others. His adventure on the fourth, where had a double-par, rocked him a bit but he recovered well.

There was no ball sweep, but there was an NTP which saw Dan Bayley as the recipient on the ninth and no one on the 18th.

Here is the News: The Final of the AAA Cup, sponsored by AAA Septic Services, was played on Sunday. This is a scoring competition run through the year that uses a points system similar to the Fedex Cup in the PGA. The top-12 then enter a play-off.

The paly-off winner was Steve Betland with a nett 69. His eagle on the sixth coupled to birdies on the 15th and 16th and a bogey on the 14th had him well ahead of the field.

The other prize winners were: second - Shane Sallaway, third - Greg Webb and fourth - Ethan Gaffney. A big thank you goes to the sponsor who has supported this event over four years.

The Wallace Cup Final, a handicap match-play event, has been played and won. It is always amazing how difficult it has been throughout this competition to get players together for their matches. We all have busy lives.

In the end the two combatants took to the course on Sunday. Todd Callaghan had a stern test, having lost some handicap strokes through recent good play, and needing to give plenty away. Steve Grallelis had been in good form but was slipping badly, as his century score the previous day would indicate.

But match play is different. Todd did very well on the front-nine, scoring a 39 to be right on his handicap. Unfortunately he was one-down at the turn with Steve keeping pace very well. The back-9 saw both players hit errant shots, miss easy putts and pull dramatic recoveries out of the hat.

Steve had a slight lead which Todd whittled down with relentless pressure, needing to score birdies to halve holes. The match came to the 18th with Steve 1-up. Todd found the green but Steve was closer, just off the side. Their putts reflected the tension but eventually the hole was halved, with Steve the victor.

Well done to Todd and Steve for providing a tense battle, and well done to all the participants through the year who have kept the match play event alive. Hopefully more will participate next year.

At both Forbes and Parkes Pro Shops, Ben has been running a raffle with the prize being a Titleist Golf bag, one of a special edition of bags manufactured (only 415 made).

A video of the draw is available on Facebook pages. The lucky recipient is Steve Grallelis, who now has a Titleist bag to match his Titleist clubs. All he needs now is Titleist socks, colourful of course. Thank you to all those who entered into the spirit of the event, and for supporting our Pro.

By the time you read this the Tuesday Golfers Xmas party and Forbes Vets Golfers Xmas Bash will have been played. But there is still the Christmas Hamper day, sponsored by Bernardi's Marketplace, to be played on Thursday 19 Dec. Ladies and Men are welcome, so come along for a festive fling.

Crystal Ball Time: Saturday, December 14 is the Stableford Ham Day, sponsored by Woolworth's Forbes. For some this may be the last chance to put something special on the Xmas table. Sunday has a Stableford Medley.