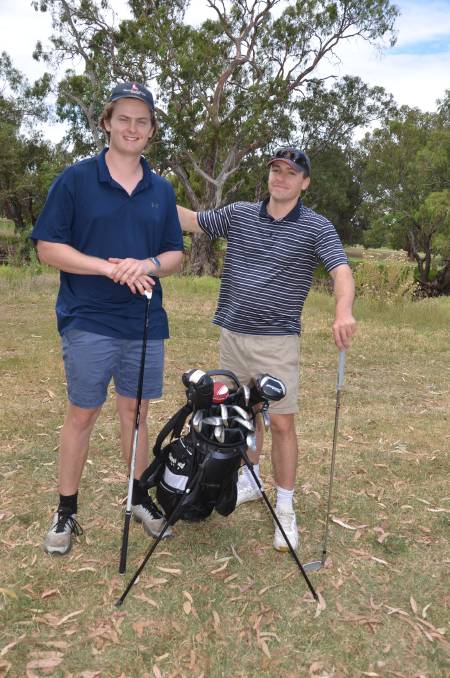 Sam Ridley and Alex Scott enjoying a game on the Forbes golf course.

On a weekend when the weather was perfect for any outdoor sport, the Forbes golfers did all they could to fit the most into the day.

There were many early starters who wanted to zip away and join their families in the afternoon, while the later starters completed their chores before playing.

The Mens comp on Sat 9 Jan was the Annual 'Righties vs Lefties' Day, sponsored by Steve Grallelis, which uses the Individual Stableford comp to separate the players into right-handed and left-handed groups to determine the Trophy winner.

The winning group this year was the Righties, whose score of 230 points, helped by the Stableford comp winners, was well ahead of the Lefties 202 points.

The Lefties had some good scores, but the real difference was that both top scorers were right-handers.

In the Individual Stableford, 75 players were keen to do their best. Unfortunately the sponsor did not contribute to the winning score, but his score was indicative of the general score across the board.

The Division 1 winner was Ray Taylor, with 41 points. He enjoyed a round in company of fine gentleman retirees, who play the game at a more sedate pace than Ray's usual drive. Ray was really pleased with his back-9, amassing 22 points.

The runner-up was Shane Sallaway, fresh from his return from north Central Coast Queensland. Shane was pleased with his 71 scratch score, which resulted in 38 points, and especially pleased with his front-9 where he shot 3-under.

The winner here was Garry Pymont, who scored a finely crafted 41 points. His three 1-pointers were more than covered by his many 3-pointers.

Runner-up was John Ridley with 38 points. He was helped by playing with his family, as this ensured he concentrated on his game. A few more 3-pinters would have helped.

The NTP's were a clean sweep for Rob Webb, who took out both the 9th and 18th balls.

The 3rd Hole Pro Shop Super Pin went to George Falvey, whose tee shot hugged the right side of the green and clung on to remain only about 2 metres from the hole.

Unlike last week, the 2's were more prolific this week with eleven in total scored. The 9th proved an easy hole, yielding six 2's in total.

Scoring a '2' on the first hole is always an accomplishment, achieved this week by Phil Maher and Graham Newport. Both fine tee shots, followed by 'sure as' putts.

The best '2' of the day was scored by Head Pro Adam. His '2' on the 9th was easy, but his effort on the 16th was much better. A good drive left him only barely 80 meters to the pin.

His nicely judged pitch shot landed on the spot as planned, then ran straight to the pin and neatly dropped in the hole.

Over the festive season the course has played host to many travelling golfers. They all compliment the course and especially the greens.

Our golfers generally feel the same, although Big Shane was a little perturbed at times. In these dry conditions there can be some dry lies and unfortunately Shane had a few. But such is golf and nevertheless he was pleased with his 38 points.

Another player to be on the wrong side of the hard bounce was James Grierson.

His drive down the 16th was on target to reach the green, but on the second bounce it took a wicked bounce right and caught the smallest of the trees on the right and just short of the green, finishing in the long grass. He did manage a par though.

The greens gave no cause for complaints when putting. Thus Niel Duncan can only blame himself when he let his opponents off the hook during their group match.

It was a tight tussle, which could have resulted in an emphatic win by Niel and George Falvey but for the missed putts.

In brief, the result was a tied match, courtesy of a par on the 18th by Stevie G as predicted by Andrew Grierson before the hole was played.

Last week's rain caused the suspension of some grudge matches. Peter Grayson was pleased with the sunny conditions, as it meant that his dismal showing last week, being 7-down before suspension of play, was reversed to a solid win by he and substitute partner Max Haley over Gregg Web and Brian Doyle.

Another interesting group match was played between Pete Barnes teamed with Harry Callaghan, and Scott Kirkman teamed with Jacob Bernardi.

They all produced 'average' rounds, but Pete was often by himself as Harry strayed across the course, leading to a loss.

The good form by Ray Taylor led many players to being suspicious of a 'Lance Armstrong-like' performance by him. But it was all above board. Someone who did not need drugs was Andrew Dukes.

For the first time in nearly 15 years Andy walked the whole 18 holes, pushing his buggy along commandingly. Andy had both knees operated on late last year, and wanted to complete the recovery by exercising regularly. Over the next few weeks his cart may get less use than usual. Well done Andy.

There was no Sunday Stableford Medley, with no participants entering the comp. But Sixes and social play were enjoyed by many throughout the day. 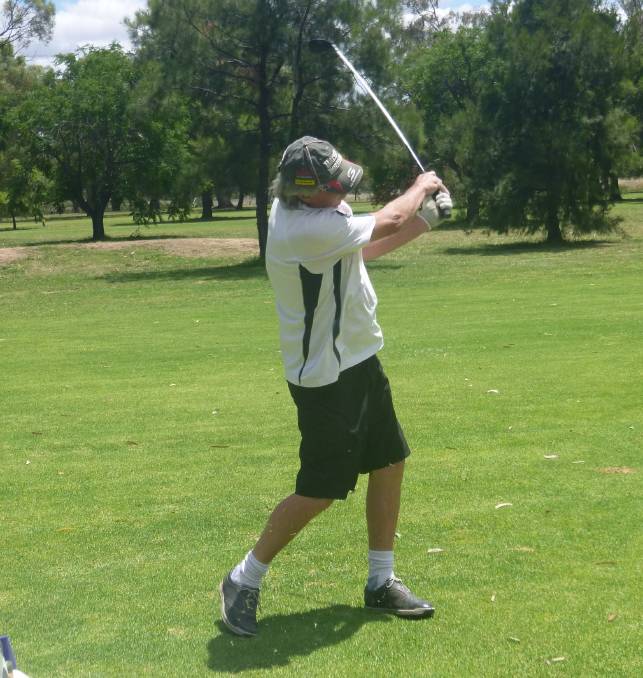 Doug Churchill follows through on his approach shot to the 12th.

The 2020 CWDGA Pennants will commence in February. If you are interested in playing please contact John Betland (0437 572529).

Also note that the handicap cut-off is 30 January, and not earlier as in previous years. This will enable players to settle into good form represented by a reasonable handicap.

Head Pro Adam will once again be running coaching classes for Junior players, commencing in the second week of Term 1. The classes will be on Thursday afternoons, with 4pm for the 6-10 yo and 5pm for 11 yo and older.

Drop into the Pro Shop to pick up an Information Pamphlet, which explains how to register through the 'My Golf' initiative. Contact the Pro Shop 6851 1554 to get more details.

The 2021-22 Programme Book is being printed and should be available by the middle of February, so keep your eyes open for that.

The Sat 16 Jan comp has been changed to a 4BBB Par + Individual Score, but still sponsored by Cahill Footwear.

Sunday 17 Jan is a Stableford Medley.

Saturday 23 Jan is an 18-hole Individual Stroke, sponsored by Rob Allen Livestock Transport. Sun 24 and Tue 26 are both Stableford Medleys

The eleventh round of the ASI-sponsored Forbes Golf Club Summer Super Sixers competition, played last week, saw many of the top teams maintain their place on the table.

The break over the festive season enabled some teams to refresh, but importantly did not affect the continuation of form by the leading players.

In Pool A, 'Still Trying' has maintained their lead over 'Drawshanks' and 'Just for Fun'. Meanwhile Pool B remains tight with the newly named 'Banana Split Pants' slightly ahead of 'F-Troop' and 'Hook, Drive and Sink It'.

Scores under 100 total shots were hard to come by with only one team managing that - 'Banana Split Pants' scored 98.5.

The next best scores were 102.5, shared by 'Drawshanks' and 'F-Troop', who unfortunately lost to 'Banana Split Pants'.

The Best Member Nett Score went to Briana Duncan (nett 31.5). The Best Non-member nett score went to Luke McMahon with an outstanding nett 23. Some dramatic handicap changes will result there.

Check the Notice Board for the full list of Ball winners.

Pencil in the Grand Final and Presentation Night for Mar 28. This is aiming to finish before Easter.