It's hard to believe it's not much more than two years since we first heard of Boys to the Bush, when the team of founders flagged plans for their first camp here.

It's now become such a valued part of our community, and we truly believe - along with all those invested in it - that it's changing lives.

The Advocate had the opportunity to sit down with some of the key team members this month when they had their team in Forbes for training - and we're delighted to bring you this very good news story.

Just 18 months ago Boys to the Bush's only employees were Adam DeMamiel in Albury and Jared DeMamiel in Forbes.

Fast forward to today and there are some 25 full time and more than 40 casual staff between Forbes, Bathurst and Albury.

Everything changed when the team realised they needed to do more than offer the incredibly successful holiday camps they'd been running for a couple of years.

They were bringing siblings - separated in care - together for weekends when they saw the need to birth MENtoring, the area that's now seen the organisation's biggest growth.

Disengaged, disadvantaged or at-risk boys get one-on-one support, with their goals ranging from a firm hand shake with eye contact, to gaining a learners permit or employment.

In the past 12 months, 211 boys aged seven to 20 from Albury and Wangaratta through to Forbes, Parkes, Canowindra, Bathurst and Dubbo have been part of this program.

What makes it possible?

In short, it's this amazing community.

Boys to the Bush is based on a solid business model, with the oversight of a board of directors, but this work really does take a village.

"We genuinely are reliant on the community to do our job," Jared says.

"We're fortunate that we get to spend the time with the kids and see them and see the change, but it's all those pieces of the puzzle coming together.

"It's the groups that come in and cook a barbecue, the farmers that let us access their properties with their kids.

"The businesses that allow us to come in for work experience with the kids."

Adam, one of three co-founders, believes the community has always genuinely wanted to help these kids.

"We all know that all these communities are made up of 99 per cent bloody good people who will do what they can do, but most people don't know what they can do to support these kids," Adam says.

"We are that conduit to provide that.

"If you can write a cheque that's brilliant, but it's just as important for the farms that open their gates, the tradie that shows a kid how to fix a motor, all those things.

"Our goal is to have our logo in the window of most of the shopfronts in town - not for promotion of us, we don't need that, but for the kids to see how good a community they've got.

"They feel like they belong to Boys to the Bush and if they can see all these businesses around town, people that indirectly are supporting them, I think that's where the real strength lies." 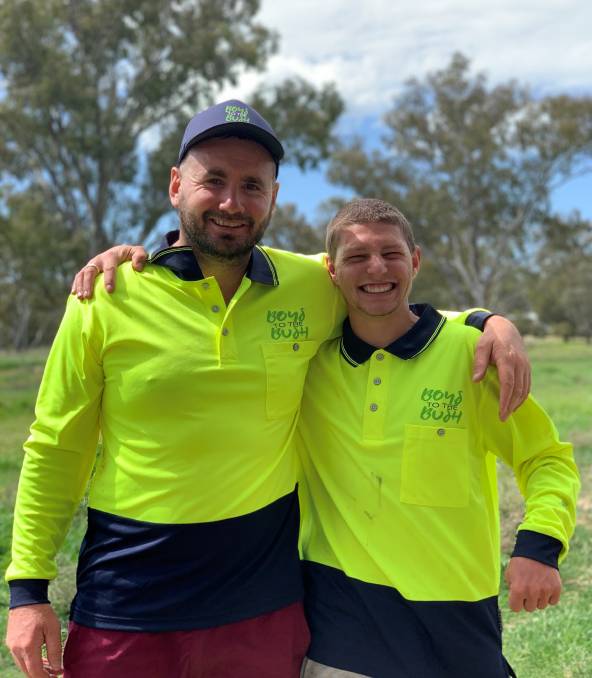 The testimonials in their annual report say it best.

One mum wrote of the transformation in her son: "He has learnt so many new skills, not only hands on practical skills but the skills to be able to cope with different situations, the ability to interact more freely with others, to come out of his shell and be a more confident person ... A few months back I was extremely concerned for his wellbeing ... It's hard to believe he is the same person."

One young participant wrote, "The Boys to the Bush program has surrounded me with positive role models who look out for me, all year round. There is also now the chance for my brothers and I to spend weekends together, so we can grow up around each other."

A NSW caseworker wrote that they hadn't experienced another organisation doing this work.

"Their work with the teenage boys I case manage is amazing. Their mental health and their confidence has improved, as well as their ability to actually consider a future. We work with kid who have experienced trauma and they tend to live in the here and now; the future is something that is beyond them."

Victoria Police praised Boys to the Bush for the opportunity to divert youth at high risk from the criminal justice system, linking them to an ongoing community-focused support network that builds a sense of ownership for the young person within the community.

The early growth of Boys to the Bush might have been organic, but it's now very intentional and the vision is big.

"Now we know who we are, we know what we do well, there's a lot more strategy and governance," Adam says.

A lot of those kids will be part of five-week programs that have now launched in schools including Forbes High, Forbes Public and Forbes North as well as Bathurst, Canowindra and Young, although these were limited by COVID this year and they look forward to those growing in 2022.

"We are getting some great outcomes from that around school attendance," Adam pointed out.

Boys to the Bush is also now accredited to provide alternative care 24/7 for kids that don't have anywhere to stay.

After Christmas, they will be hosting their first girls-only camp Girls to the Country.

"We will see how it goes because it requires a new skillset and resources," Adam said. "It's pretty exciting, the demand for that is incredible."

While Boys to the Bush began with a team of men they have been - very intentionally - bringing women on board over the past six months.

"We're all about exposing them to positive male role models, but (due to) a lot of the background of these kids, a lot of the outcomes people want us to achieve is around respect for women," Adam said.

The diversification of the workforce is enabling them to live out healthy, respectful relationships before the boys as well.

Who are the staff?

The BTTB staff come from diverse backgrounds, but the team is keen to highlight there are locals on the ground working with the local kids.

Some were teachers, some were tradies, it's hard to put into words what they're looking for but what matters most is a genuine care for the kids - and having a thick skin doesn't hurt.

"It's our job to put the right training and development into those people to help them do their job better but everyone brings something different," Adam said.

Boys to the Bush acknowledges issues don't run to business hours, nor do they stop at a certain age, so the team's priority is commitment to the kids.

"They're used to being let down and we've got to do our best not to let them down," Adam says.

How is it possible?

Boys to the Bush was built on a user-pays funding model, in that the majority of children who access their services are funded to do so.

But there's a huge role we can all play because believe it or not, they've already been so successful that some of the boys they work with have lost their funding.

"This year we've contributed more than $200,000 in pro bono support to kids that don't have support or because we've such a good job they lose their funding," Adam said.

"The better we do, the less funding they get but we've remained committed to those kids once their funding has ceased - that's where we're chasing philanthropic and government support to continue to support the kids that don't have funding."

In fact, just the morning we sat down with the team they'd received news of funding for three new communities.

"The one thing most of the kids haven't had in their lives is consistency, so we needed to develop a model that is going to be here for 100 years," Adam says.

"The actual community buy-in in Forbes is the envy of the others ... we're super proud of this community," Jared says.

The farmers who opened their hearts and their properties at the peak of the drought; those who provide property for alternative care; the businesses who supply uniforms, meat, bread, or groceries; the tradies who fixed up the former Aussie Biscuits factory as a headquarters; the businesses who offer work experience or even coordinate certification that has led to employment; those who provide funding.

The list of thank yous is so very lengthy, and for the boys it's knowing that so many people care that makes a real difference.

It all adds up to a future for these boys - and for all of us.