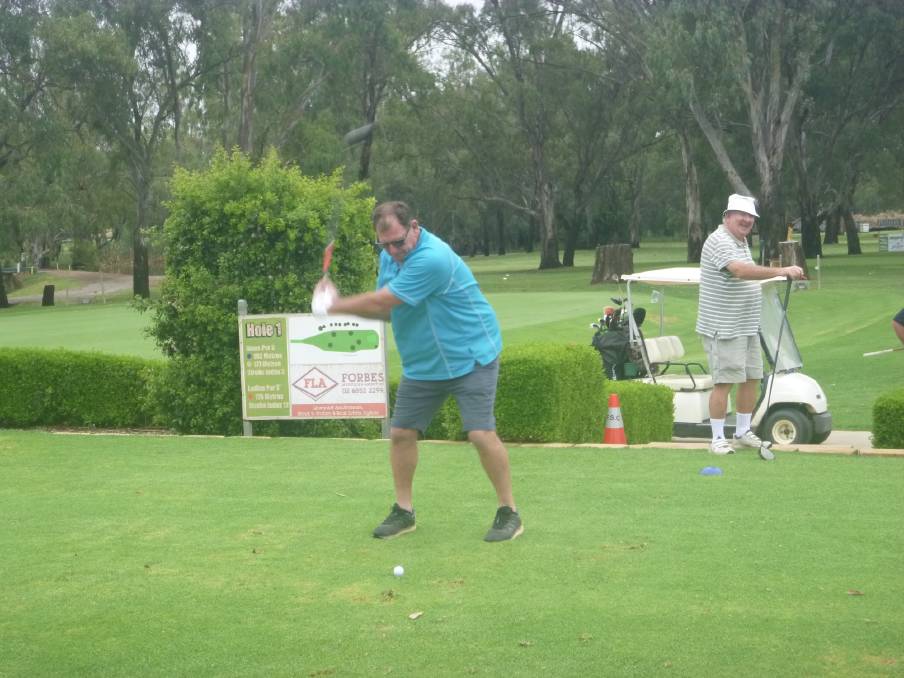 MONTHLY MEDAL: Mick Prior starts the day with a big swing, as Frank Hanns watches on. Picture: Short Putt

On Saturday the weather was good, although threatening some late storms, but there was definitely something in the air.

That proved to be the outstanding performance by John Betland who was in fine mettle to post a scratch 64 score.

This is certainly the headline event for the Saturday competition, which was the January Monthly Medal, sponsored by Steele Tech.

A field of 56 players were keen to master the conditions, get a good score and get back to the Golfie before the forecast storms hit.

The A-Grade Medal went to John Betland, with a nett 66. He turned at only 3-under then proceeded to throw the 'BNC' aside and come home in 5-under.

An eagle on the 15th helped, supported by three other birdies and no blemishes.

Runner-up was John Zannes who was feeling refreshed after the Christmas break.

He was very pleased with his front-9 and lost a bit on the back-9 but felt that his 68 nett was worthy of a prize.

The B-Grade proved to be a field day for Tony Cogswell, who finished runner-up in the Dec 2021 Medal, but took out the 'MoM' for 2021.

That form earned him a nett 68, compiled by a tidy front-9 and even tidier back-9.

He started with pars on the 1st and 2nd, managed a birdie on the 15th and finished with a par on the 18th.

Runner-up was Wayne O'Neill who scored what would be described as a mediocre 71 nett, but on any other day would have been tremendous.

He too did well on the front-9, but lost his way on the back-9, managing to salvage something with a '2' on the last hole.

The C-Grade also had an in-form player snatch the winner's trophy.

Steve Grallelis managed a very tidy 70 nett, despite a shank on the 3rd, to finish ahead of Matt Skene with his 71 nett.

Steve made it easy for his marker with a monotonous run of 5's on the back-9.

Matt equalled Steve's front-9 but did not fare well on the back-9 where an '8' on the 10th made it hard for himself.

There were no visitors.

The NTP's went to - 9th: K Herbert; 18th: A Dukes, neither of whom converted. In fact, there were only three 2's, spread across all divisions. And none on the 1st hole.

Sunday's weather forecast was not inviting, and consequently the Stableford Medley field was small. Ultimately Tom Toohey won with 39 points.

The only NTP went to Harry Callaghan on the 9th. There was no ball sweep, which saddened a couple of Parkes palyers who had come down for a hit.

Across the Christmas and New Year break there were a number of Stableford Medley comps, with varying field sizes.

Some brief results of those are provided below.

New Year's Day had a good field of 61 players, all keen to continue to walk off the Christmas pudding. And the scoring was pretty good.

Mike Spice (42 pts) took out the Div 1 winner prize, but only on count back from Ethan Gaffney (42 pts). It was a topsy-turvy day for their scores with Ethan reversing Mike's 20-22 points split to miss out.

Both had a 4-pointer, with Mike being more consistent. If not for a 'miss' by Ethan on the 10th the places would also have been reversed.

The Div 2 scores saw Graham Newport (39 pts) start the year well, nicely ahead of Frank Donohoe who had 38 points on count back from Dave Tildsley.

Graham started with a birdie, neatly side-stepping the 'Don't par the 1st' syndrome. Frank was doing exceptionally well, until the 17th. Damn!

Boxing Day had a medium field with no outlandish scores.

Todd Callaghan won the day with 38 pts, ahead of Jono Roylance on 37. The ball sweep went to 34 pts on count back, with the only NTP being on the 9th where Ecky Dawson was successful.

The comp on 27 Dec had a small field, who produced good scores.

Dave Bernardi took the family trophy, when his 40 points pipped Jacob Bernardi who had 39 pts.

The ball sweep went to 34 points, the only NTP going to Jenny Fletcher on the 9th.

The stories of woe and success span a couple of weeks, but there are some gems.

Mike Prior had a birthday on Fri 7 Jan, claiming to be 37 yrs old, and was in high spirits.

But his opening tee shot was a shocker. It gouged the ground, pushing the ball forward but still did not make the white tees.

In the same comp Wayne O'Neill was playing well. His second shot on the 15th cleared the water finishing near to the green. Unfortunately he took six shots to get down from there, finishing with an '8'.

Scotty Kirkman started the year well in the comp on New Year's Day.

He scored 39 points, and was unlucky to miss out on a prize. Maybe this will be his year for unrivalled success.

Les Little's golf in the new year was much the same as for 2021. He had a good front-9 then crashed and burned on the back-9. He is keen to instigate a 'Bradman' prize, as he thinks he is sure winner.

There were the usual problems. In one comp Frank Hanns hit another player's ball twice, despite his ball being very clearly marked. And the dreaded shanks afflict some players. Steve G has that problem and is searching the internet for 'magic potion' to dispel that error. He has buckley's!

Head Pro Adam ran a Junior Golf Session on Tuesday, and is keen to run more. Give him a call at the Pro Shop if you have a child interested in these sessions. There will also be classes once school starts.

The first week this year commenced on Mon Jan 3rd with some very good scores posted.

No doubt the ground has hardened up a bit, allowing for more run. But then handicaps will drop. We shall lose a couple of weeks but we are on schedule to have the Finals series as planned.

The Golf Programme Booklets for 2022-23 are being prepared and will be available in early February. Let us hope we can get through the year without any interruptions.

One item in the Programme that has shifted around is the 3-P Ambrose Medley, which has been set for Sunday 13 March.

This weekend we have the Annual 'Leftie's vs Righties' Trophy, where the individual scores for the field is split into two groups (Left-Handers and Right-handers) and a winning "Handedness' is determined. Sun 16 Jan has a Stableford Medley.

Harvest, holidays and covid are being mentioned as reasons for the smaller then usual fields for mid week golf competitions where 22 veterans played the 'twin towns' competition here in Forbes last Thursday.

While the holiday break had a few breathing heavy at the end due to a lack of exercise plus fine wine and dining that did not come into calculations for Forbes supporter Ken Sanderson who started the year in top form finishing only a handful of shots over par recording 42 points for the 18 holes.

Moree visitor Russell Carty playing off a six handicap was runner-up enjoying his round registering 39 points.

At the other end of the spectrum Parkes member Robert Lea had that round which is to be forgotten taking the encouragement award. In the 'twin towns' shield Forbes scored 209 to scrape home by three from their welcomed visitors.

In nearest the pins at the 9th and 18th Russell Carty had a field day winning both A grade divisions while B grade winners were Graham Cooke and John Dwyer, both from Parkes.

In fact social golfers from the Tuesday social comp kept the flag flying over the holiday break with play each week where on December 21 winner was Ken Sanderson with 32 points, runner-up Brian Clarke with 30.

The following week winner was Peter Barnes after a five-way count-back to collect the 'goodies' after posting 23 points.

Tuesday's social competition open to all golfers, arrive from 9am to join a group with tee-off any time after.