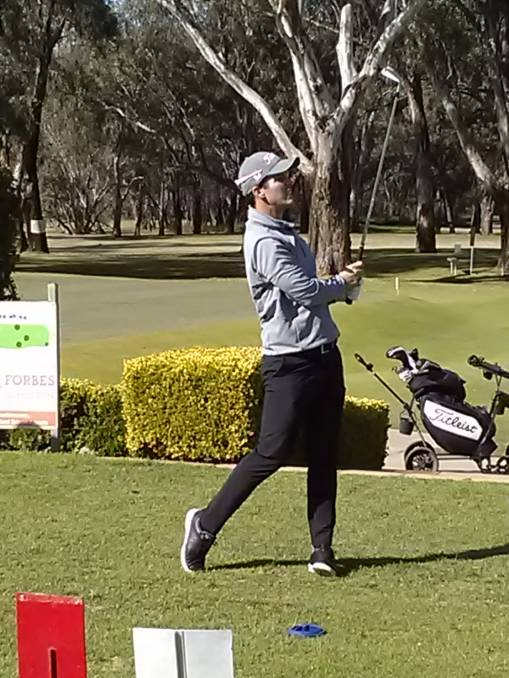 PRO AM: Forbes' Head Pro Adam Demidjuk teeing off on the first hole in the Forbes Pro-Am. Picture: SUPPLIED

On a weekend the general weather conditions seemed to slow down the activity on the golf course. It apparently slowed the swings down which led to a struggle by many to produce a reasonable score. But despite the higher than usual scores the winners were happy.

On Saturday the Mens comp was the May Monthly Medal, sponsored by Adept Plumbing. The field was lower than usual with 53 players scattered across the course. Many of the regular winners were absent thus giving hope to the remainder that they may earn a prize.

The A-Grade was won by Wade Ritchie who managed a par round of 72 nett. He was level with the card after five holes, but then errors crept into his game. Due to his membership classification Wade was not eligible for the Medal, which was awarded to Runner-up Alf Davies who managed a mere 74 nett. Alf was one better than Wade on the front-9 and one worse on the back-9, but had less handicap to play with.

The B-Grade had the same winning margin with Paul Kay taking the prize and the Medal with his 76 nett. He undoubtedly could have done better without an '8' on the 14th where his ball apparently took a vacation and could not be found. Runner-up was Rob Webb with 77 nett. His day started badly with a par on the 1st, and despite pars on two other par-3's he could not produce much magic.

The C-Grade continued the trend of one-shot margins. This time it was Al Rees with his 77 nett who won ahead of Sam Redfern on 78 nett. Al was pleased to grab the Medal having kept any serious blunders out of his game and finishing with a par on the 18th. Sam Redfern did well for a new player, earning a par on the 9th and keeping a steady score until a few mishaps towards the end of the back-9.

The NTP's went to - 9th: R Webb; 18th: T Cogswell, where neither made a '2'. Befitting the conditions on the day there were only three 2's scored, all on the shortest holes. George Falvey marked his rare foray into golf with a '2' on the 9th.

The 3rd Hole Super Pin went to Paul Pymont with a common shot to 2.65 m proximity. He followed that with a good putt to score a '2'.

The conditions undoubtedly made scoring difficult, with very little run on the fairways and tight pin placements following the Pro-Am on Friday. Not many players were keen to relive their exploits of the day.

There was a group who had better fortune than most. Paul Kay and Al Rees were on opposite sides of the pairings in their group. Both were playing well and battling hard for the all-important KENO ticket. They seemingly had little help from their partners, one of whom likened his game to Jason Day's round in the third round of his PGA event. But Terry's biggest issue was his putting, and a calamity on the 15th.

Double figures on a single hole were more common this week than on other weeks. Dave Tildsley shot himself in the foot with a '12' on the 6th hole, followed by a '9' on the 7th which put paid to his day.

But Robert Scott fell badly to both of the 'demon' holes, recording an '11' on each of the 7th and 15th holes. In fact the 15th was the worst hole of the day, catching four players out with double-digit scores and nabbing quite a few more with 9's, whereas the 7th only forced one double-digit score.

Max Haley and Ted Morgan fell fowl of the 4th hole, where Ted's nemesis returned after scoring a par on his previous visit. And Max managed double-digits, but no Bo Derek.

It was good to see George Falvey able to get out on the course. He was understandably 'rusty' but did manage a '2' and a couple of pars. Doug Churchill also returned for a game and fared as well as anybody on the day. Once again he chose a stroke event to re-ignite his desires, when perhaps he should have waited for a Stableford event.

There was no Sunday Stableford Medley, due to a lack of players.

A big event was the Forbes Pro-Am, played on Friday 6 May. All up 94 players participated, which included 27 Pros and a number of visiting players from Newcastle, Crookwell, Griffith, Parkes, Cootamundra, West Wyalong and Trundle.

The Pro winner was Dylan Thompson from Dubbo. He recorded his first ever win on the Pro-Am series and was very pleased to have done it at Forbes, which he refers to as his 'home'. His score of 69 scratch was three ahead of a group of four players who finished on 72. Local ladies Carolyn and Brianna Duncan where in his group and had a ringside seat to some great golf.

The Pros did struggle on the course, with the greens quite slow due to recent rain. Five of the Pros scored 82 or higher. Our local Pros had mixed fortunes, with Head Pro Adam scoring 74 and Pro Michael Brindle managing 78.

The Amateurs played a Stableford comp, and once again the scores were not startling. The results were:

It was a good day, assisted by prizes sponsored by Titleist and TaylorMade and capped off by an evening Presentation and Meal. During the Presentation a couple of Pros enlightened the audience with their tales of 'life as a touring Pro', providing many laughs.

This weekend is the Forbes Open, with a big field expected. Saturday has the 4BBB, sponsored by Forbes Livestock & Agency, and Sunday has the 18-Hole Stroke Open, sponsored Forbes Shire, Golfie Hotel and Golf Harvest. The course will be closed on Sunday.

The 'Trilogy of Golf' follows on the next two weekends with the West Wyalong Open on May 22 and the Condobolin Open on May 29. Details on the flyers on the notice board at the Pro Shop.

Head Pro Adam encourages players to use their 'Store Credit' before the ends if the financial year. And also reminds players from the Summer Sixes comp that there are some vouchers to be collected from the Pro Shop. Come in and check if there is one for you.

Sat 21 May, Election Day, has an 18-Hole Stroke, sponsored by B&C Automotive. Sunday has a Stableford Medley and the West Wyalong Open.

Due to the Parkes pro-am and thought of a wet course in Forbes last week only 22 player for the 'twin towns' veterans golf on Thursday.

Winner was Barry Parker with 38 points from Ted Morgan next best on 37 while the home club made it a trifecta of awards with Rodney Joseph Besgrove taking home the 'burner' ball with the encouragement award.

'Twin towns' vets play in Parkes today, 9.30am noms for a 10am tee off before today week Lachlan Valley clubs will converge on West Wyalong for the monthly 18 hole competition.

Last week the ever consistent Barry Parkes won the Tuesday social 12 hole competition with 33 points from a fiery Brian Clarke next best with 26 points.

Anyone thinking of a morning hit is invited to play any Tuesday, especially beginners with tee-off from 9am for a relaxing morning in social company.